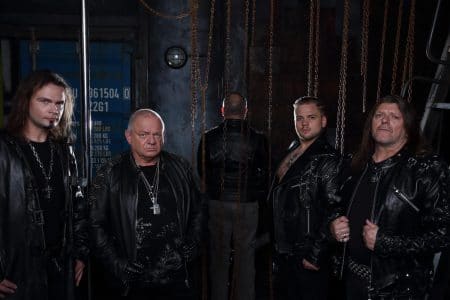 “Dirkschneider/U.D.O. has found a Guitarist to stand in for the upcoming 2018 Festival Shows!

He knows all of the Songs extremely well, and will be with us for all the shows (Both U.D.O. and Dirkschneider) through to October 19th 2018. More details about this Very Good Friend soon……

Meanwhile the Band is trying out several different Guitarists in the rehearsal studio, and is very optimistic to be able to announce a permanent replacement sometime during the summer of 2018.

For all upcoming shows go to www.udo-online.com”

Wikipedia states the following about Kaufmann (with slight edits): “He joined Accept as drummer early enough to appear on the cover photos for their debut, but too late to record the drums for the album (that was done by Frank Friedrich). After drumming on nine albums he had to give up drumming towards the end of Accept‘s career due to health problems.

Kaufmann has produced the live albums Staying a Life and All Areas – Worldwide for Accept and contributed significantly to Accept‘s songwriting. He has worked extensively as a record producer for other bands. He produced or co-produced every U.D.O. album from 1990 until 2011.

Stefan Kaufmann joined Accept‘s singer Udo Dirkschneider in his band U.D.O. as guitar player in 1996, following Accept‘s second breakup, and has recorded seven albums with them. On 13 September 2012, it was announced that Kaufman has ceased playing in U.D.O. for health reasons, though he will continue to work with the band in other capacities.

During his tenure with Accept, Kaufmann used Tama drums. He was also one of the first drummers to use Meinl cymbals when they became widely manufactured and sold in the late 1970s.”