Brazilian rockers Dirty Glory have released a video for the song “Sticks And Stones” from their forthcoming album Mind The Gap, which will be released on November 6, 2015.

The band’s press release states (with slight edits): “After two years of labor, São Paulo hard rock band Dirty Glory releases “Stick and Stones”, first single and video from the new album, Mind The Gap, with release date set for November 6th in all digital platforms for streaming and free download. The video was produced by Submundo Filmes with Michel Souza at the helm. “We needed inspiration from the audiovisual language itself, to get something different. The solution was innovating in editing, with images juxtaposition, negative work and scene composition. It’s a different video and the inspiration was the opening scenes from ‘True Detective’”, explains guitarist Reichardt. “Definitely, our best work to date”, adds guitarist Dee Machado.

“Stick and Stones” brings one of the aspects of the concept from Mind The Gap, breaking traditional values for an evolution. “We’re talking about revolution, impunity, and union to face the abuse we go through every day, in every way. Everybody struggles with something they don’t agree with in the first place”, says singer Jimmi DG. 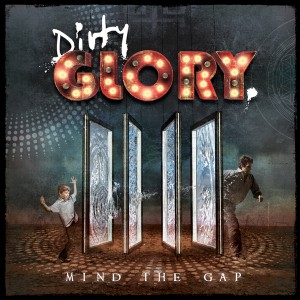 “Hey this is for the losers, the sinners, the beggars and the so called winners.
This is not the wasted generation, we are the awaken generation!
Those are really the ones who don’t fit in. And for the ones who do: WAKE UP!”

Dirty Glory is now ready to release on November 6th, their first full-length. Mind The Gap has 12 songs; 10 new and two re-recordings from the previous singles. “The songs are in the vein we love: good old glam metal influenced by from Van Halen, Guns N’ Roses, Kiss and Danger Danger,” explains singer Jimmi DG. “A bit of Blues and some metal punch are always welcome as well”, adds guitarist Reichhardt. Mind The Gap will be available on all digital platforms for free streaming and downloading, and physical copies will be available for sale on www.dirtyglory.com. Dirty Glory’s goal is quite simple: to show their music to you, glam metal fans and hit the road. On stage or in the studio, they wanna rock you. Are you hanging by the door or coming in?”