Back on January 27, 2011, Dirty Looks frontman and band leader Henrik Ostergaard passed away and the band seemingly came to a halt at that time. 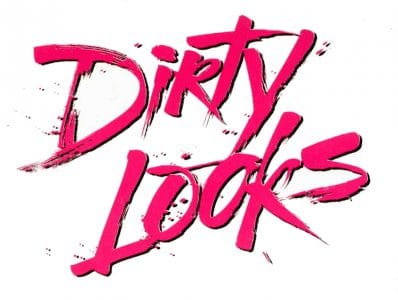 More than five years later, it was announced that Dirty Looks were reforming but with no original band members. This version of the group was spearheaded by frontman Todd Cage who apparently obtained the rights to the name Dirty Looks. About a week later on May 28, 2016, it was announced by Cage that all efforts to form a new version of Dirty Looks had been dropped due to the negativity surrounding such efforts.

Dirty Looks are now reforming with Dangerous Toys, Broken Teeth and Ignitor frontman Jason McMaster on lead vocals for what appears to be a one-off performance for now at the inaugural Ballroom Blitz event hosted by Brad Lee Entertainment in Glen Burnie, Maryland, USA on March 20 and 21, 2020. Sleaze Roxx has it on good authority that classic  Dirty Looks line-up guitarist Paul Lidel (who happens to be McMaster‘s bandmate in Dangerous Toys) will be part of the Dirty Looks line-up at Ballroom Blitz. Dirty Looks will be playing their breakthrough album Cool From The Wire in its entirety at Ballroom Blitz.

Wikipedia states the following about Dirty Looks (with slight edits):

While in California and upon their return home to Philadelphia, the group had a revolving door membership, yet released an EP and three independent albums before Atlantic Records offered them a recording contract. For their major label debut, Dirty Looks consisted of Paul Lidel (guitar), Jack Pyers (bass) and Gene Barnett (drums). The resulting album, Cool From The Wire in 1988, entered the Billboard chart, while getting substantial airplay on MTV for their video for the song “Oh Ruby”. Produced by Max Norman (Ozzy Osbourne, Megadeth, Lynch Mob), it is still regarded by many as one of the best hard rock albums of all time. Twenty five years later, Cool From The Wire continues to sell online and in record stores all across the globe. 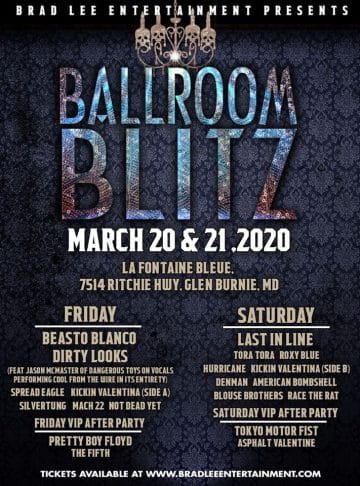 For the follow-up album in 1989, there were conflicts with their original record producer Beau Hill, and the original recordings for Turn of The Screw were scrapped, but the re-worked album would be the group’s most successful release reaching higher on the Billboard chart. The President of Atlantic Records and the higher-ups of their new management team Hard To Handle thought that it would benefit the band if they hired a producer who had current albums on the Billboard charts. Beau Hill was hired to record the album but the band felt that he was not capturing the street sound that they were looking for. The Hill sessions were scrapped and John Jansen was brought in to produce Turn of The Screw, which was released in 1989. After the album was released, the band toured in promotion.

Their album of outtakes, Bootlegs was released in 1991, then the group broke up in 1993 following the release of Five Easy Pieces with Ostergaard forming Rumbledog with Robbin Crosby of Ratt and Paul Monroe of XYZ, Lidel hooking up with Dangerous Toys (and later Broken Teeth and Adrenaline Factor) and bassist Brian Perry resurfacing in Jake E. Lee‘s “Wicked Alliance” and in Prong.

Ostergaard began recording under the Dirty Looks moniker again in 1994, to record the Chewing On The Bit album. Then he worked with Rumbledog again, releasing an album in 1995. Original drummer, Todd Yetter (of American Sugar Bitch) was replaced and not credited. The line-up continued with bassist Jassen Wilber, drummer Ron Sutton, guitarist Mike Ondrusek and guitarist Mike Smith. Ostergaard put out two releases as Dirty Looks in 1996.

With the personnel above, minus Ondrusek and adding singer Gabriel Scott Robison, Ostergaard took a back seat in the vocal department and formed the Burning Orange project who released an album splitting up in 1996. After that, Ostergaard retired from the music industry to focus on family life. In early 2007, Ostergaard nearly died from alcohol poisoning. With the changing climate of the music scene, the release sold moderately…prompting the current band members to branch off into different directions and pursue other projects.

According to their Myspace page, Dirty Looks reformed in 2007, and released a new album, Gasoline. Two more studio albums were released in 2008; Superdeluxe and California Free Ride.

At the end of 2009, Dirty Looks signed with the Nashville, Tennessee based label, FnA Records. In 2010, they re-released three albums.

On February 5, 2010, bassist Greg Pianka was stabbed to death in a bar brawl at Hi & Dri Pub along West Lake Road in Erie.

Henrik Ostergaard died, at the age of 47, on January 27, 2011. The Erie County, Pennsylvania coroner stated that he had died of liver failure while under hospice care.”