Dirty Passion band members taking a break from the group

In a surprise announcement, Swedish sleaze rockers, Dirty Passion, have announced via Facebook (with slight edits) that they are taking a break: 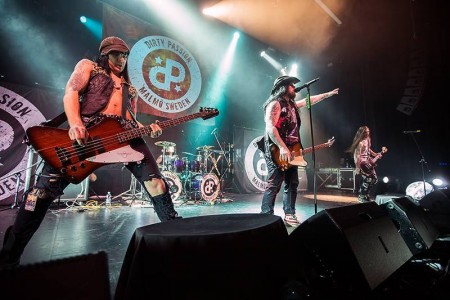 “We have decided to take a break from DIRTY PASSION.
It’s been a couple of busy years (2012-13-14-15) with several great European tours with hundreds of shows, 2 albums, videos etc.
We`ve reach the point where we all feel that we need to do other stuff for a while. With that, we can not focus on working on a new album or do tours right now.
Instead of breaking up the band ,we have decided to take a break .
We will be back and we will put out another album in the future. But we will NOT rush to get it done, or change members for a while just to put out something new.
We can’t say when we’re back, But we will be back for sure!
Thank you all for the support and a special thanks to Håkan, Michelle and J-strand for helping us out on tours!
See you later rockers!
Micke, Nas, Chrisse & Kriss“

Sleaze Roxx declared in its review of the band’s last self-titled album: “Dirty Passion deliver in a big way with their self-titled third record — every song is a good one. There are no slow plodders to try to break the mood, instead it is pretty much pedal-to-the-metal from start to finish but with melody and catchiness being the focus via a solid rhythm section, clear easy to decipher vocals from singer Kriss Iohikoski and killer guitar solos and licks (when appropriate) from lead guitarist Chrisse Olsson.” Sleaze Roxx concluded: “In terms of originality, Dirty Passion likely won’t be bringing home any awards anytime soon with their latest studio album — but overall, the Swedish rockers have come up with a solid rock and roll record that will likely satisfy any sleaze rock listener.”