Dirty Passion to play one last gig opening for Saxon

Swedish sleaze rockers, Dirty Passsion, have announced that they will be playing one last gig opening for the mighty Saxon in Malmö, Sweden on December 2, 2015. 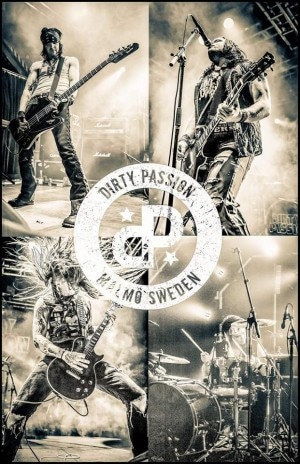 Dirty Passion posted the following Facebook messages in the last day or so:

“We will do 1 last show with dP for this year, and for a while.
We got a cool offer we just can’t turn down  😉
Stay tuned!”

“Here it is, Last show for a long while.
We got invited to open for Saxon in Malmö.
See you rockers!”

Back on November 2, 2015, Dirty Passion made the surprise announcement that they were taking a break for an indefinite period. Shortly after the shock announcement, Dirty Passion‘s guitarist Chrisse Olsson explained the rationale behind the announcement in an interview with Sleaze Roxx: “All of us have been doing Dirty Passion stuff almost every day for the last couple of years. It’s not just the song writing, recording and touring. There is always so much stuff that people don’t see, that needs to get done to be able to do a tour, get a new album or video out. But we’ve enjoyed it. We have gotten our music out there and we have done a lot of touring. It’s all fun stuff. However, we never really had a break before. We’ve been very hungry for it all to happen. It’s just time for a break and do other stuff for a while.”

Although Dirty Passion were not planning on playing any more gigs in the next year or so after their announcement in early November 2015, it is not surprising that the group agreed to open for Saxon given the following comments from Olsson in his interview with Sleaze Roxx: “There have been a couple of things that I dreamed about when I was a kid that have come true. For example, I have always wanted to open for Saxon and we’ve done that two times now! That dream would never have come true if it wasn’t for Dirty Passion.”

Dirty Passion – The Mess – Live at Babel, Malmoe, Sweden.Filmed at Dirty Passions release and tour kick off party.Dirty Passion are currently on tour with Lo…