Dirty Rock Scars release cover of Tyla J. Pallas’ “If Only” from upcoming EP ‘Bombs From The Bunker’ 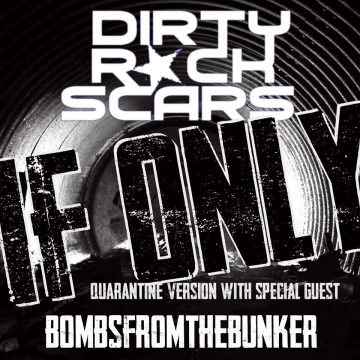 Dirty Rock Scars featuring lead vocalist John Stoney Cannon have released a cover of The Dogs D’Amour frontman Tyla J. Pallas‘ track “If Only” from their upcoming EP Bombs From The Bunker.

The following message was posted on Dirty Rock Scars‘ Facebook page back on August 8, 2020:

“As the world continues to go mad we maintain minimal sanity courtesy of every bounce off bunker walls via the espresso fueled vented sounds of creativity yes lockdown has resulted in art of the most volatile caliber from an explosion of painted colors to literary smatterings to this, the dark barely contained, unplanned, upcoming release from Dirty Rock Scars including a handful of long-awaited hard rock quarantined expression with a few tacks of cover-age tunes including a take on a TJP favorite with a very special guest on vocals…stay tuned…”

Wikipedia summarizes Tyla‘s music career as follows (with slight edits): “Tyla (born Timothy Taylor) is an English rock musician, best known for his work with The Dogs D’Amour as well as an extensive solo catalogue. As well as performing vocals, guitars and other instruments, he also illustrates the album covers in his own recognizable style.”

You can listen to Dirty Rock Scars‘ cover of Tyla J. Pallas‘ “If Only” via their Facebook page.