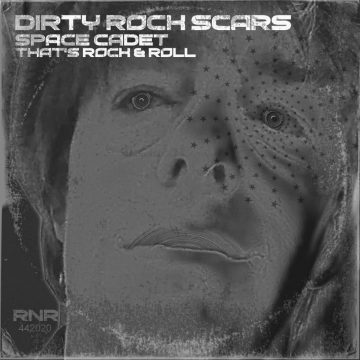 The following message was posted in part on Dirty Rock Scars‘ Facebook page back on April 19, 2020:

“Just under two hours until the new release is available for download with all sales going to benefit area F&B folks! Only $3 (or more if you wish to give more to the cause) and you can rock and roll a few bucks to help our area bartenders and baristas, etc! But until 12:30AM feel free to stream!”

More in line with the singer/songwriter/producer/jounalist’s love for sixties and seventies bubblegum, glam, glitter, and punk, Space Cadet is a labor of catchy love inspired by artists such as David Bowie, T-Rex, and Eric Carmen who is paid tribute to via a cover of tune “That’s Rock & Roll”, a hit song for Carmen as well as teen idol Shaun Cassidy in the seventies. The tracks on this release are all dedicated to Stoney‘s love for rock & roll as well as cool old seventies pop culture.