Dirty Rock Scars featuring none other than Sleaze Roxx contributor John Stoney Cannon as frontman will be premiering their video for their song “Infected F1” at the Viral Pro Wrestling event dubbed Survival in Thomson, Georgia on April 14, 2018. 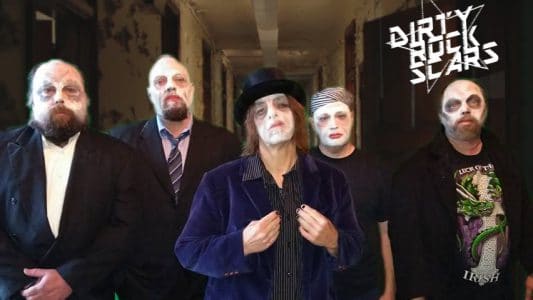 “Wrestling and rock and roll has long gone hand in hand and now the CSRA’s biggest indy wrestling promotion will be unveiling a new theme song and video courtesy of new area band Dirty Rock Scars.

Made up of long time regional veteran musicians, Dirty Rock Scars features a virtual who’s who of CSRA rockers with a list of accomplishments that include national and international releases, awards, and work with members of such bands as The Georgia Satellites, Black Crowes, Buckcherry, the Lewis Family, among others.

Created by Stoney J. Cannon, a singer / songwriter who has toured and released albums internationally as a solo artist and in bands like The Vagabond Missionaries and G-City Rockers, Dirty Rock Scars is rounded out by a cast of characters that include the manic guitar duo of Darryl Cliett (Kingthursday / G-City Rockers) and Michael James (Midnight Sentry / the Beauty Fools), drummer Christopher Lowery (Siclid / The Degenerates), and bassist Todd Love (The Porno Pigs / Vacant Minds).  Started as a vehicle for Cannon to vent of a ton of glam punk originals influenced by Ziggy era Bowie, the New York Dolls, Kiss as well as 80s and 90s bands like DGeneration and Backyard Babies, Dirty Rock Stars was approached by Viral Pro Wrestling owner to create an original theme songs based on the organizations “Infection” theme.  The result was the harder-edged “Infected” recorded by the M.A.D. Studios mobile unit and mixed by Drop Zone Recording followed by a video shoot at an old plantation house in Edgefield, South Carolina by Cyclon Media.  The video is set to premiere at the VPW event on April 14th on the jumbotron and be available to other markets on April 15th.”

Stream Infected F1 by stoneytunes from desktop or your mobile device