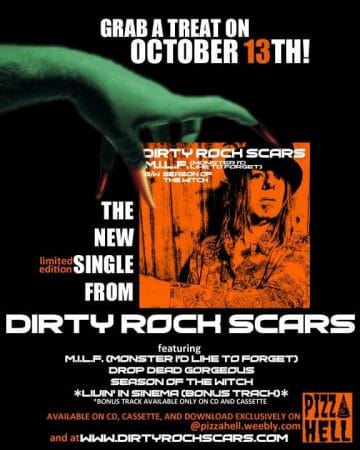 “A year and a half after the Friday the 13th April 2018 release of debut single/video “Infected”, CSRA rockers Dirty Rock Scars return with the limited multi-track single release “M.I.L.F. (Monster I’d Like to Forget)” on Pizza Hell Records.

Just in time for Halloween, fans of late sixties/early seventies bubblegum, glam, punk, pop, and rock as well as 80s rock and roll should dig the laid back recordings and the raw mixes and different sound is sure to place Dirty Rock Scars in good company among Pizza Hell‘s mix of raw, loose, punk, and experimental artists.

The single, which will be released on CD, cassette, and download (all 7” vinyl as well as 8-track cartridge versions sold out during pre-sale), will feature the title track as well as a B-Side cover of sixties track “Season of The Witch” (originally released by folk artist Donovan) and original “Drop Dead, Gorgeous.” CD and cassette versions also include made for Halloween bonus track “Living In SINema.”

“We were sitting around planning this year’s Halloween bash” said frontman Stoney, “and thoughts of KISS and Margaret Hamilton (Wizard of Oz) appearing on the ’70s Paul Lynde Halloween Special kept bouncing around in my brain to a soundtrack of kitchy Halloween novelty numbers from “Monster Mash” to the Ramones‘ “Pet Cemetery.” Before I knew it, we were swimming in a hellacious pool of ’80s slasher films and Saturday morning cartoons like Scooby Doo. After getting jacked up on cold brew, it was just a matter of sitting around the turntable trying to get our shaky hands to swap out every cool glam rock forty-five from Mud to Mötley before we had the brain-dead idea of very quickly recording new raw versions of a couple of originals. For some reason, we thought a cheesy cover of Donovan‘s “Season of The Witch” and writing our own ode to Halloween slasher films in five minutes would be cool ideas too.” 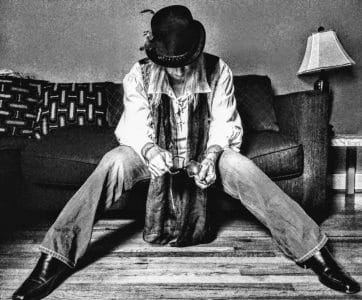 The final result of this pop culture-inspired cram session ended up being three song release (hard copies also include a bonus track) with nearly raw DIY renditions of the band’s “M.I.L.F. (Monster I’d Like to Forget)” and “Drop Dead, Gorgeous” (both odes to bat-crazy chicks), a garage groovy version of “Season of The Witch”, and written and recorded on the spot “Livin’ In SINema”, a tune about a Halloween slasher film date night movie marathon.

“Yeah, those old days of fun radio, television, movies…all dearly missed.” added Stoney, ”but even with the times being so different, you can’t help but to bump into hints of classic, fun stuff like old novelty tunes, B-horror movies, cartoons, passing fads, and just all that cool stuff that was around back in the day. Some that at one time ya might not have considered even cool at all! That’s another reason why we figured having Pizza Hell Studios put this out was not only fitting, but cool”

Dirty Rock Scars plan to release videos for each track starting with the currently available lyric video for “Season of The Witch” followed by an official video for “Livin’ In SINema” on October 13th.

The M.I.L.F. Multi-track single is available via pre-order (official release is October 13th) at the Dirty Rock Scars website www.dirtyrockscars.com and at https://pizzahellstudios.bandcamp.com/album/dirty-rock-scars-m-i-l-f

From the new multi-track single due out October 13th just got in time for Halloween! Band and order infowww.dirtyrockscars.comOrder directly on CD/cassette/d…