Dirty Rock Scars will be releasing a new EP on October 13, 2021 including a remix of their single “Injected.” The video for the single premiered on Sleaze Roxx back on April 13, 2018. 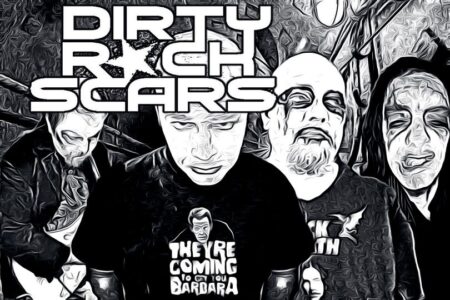 “…the one you’ve secretly been waiting for…before we get down to just all out dirty rock and roll, in typical DIRTY ROCK SCARS tradition there’s Halloween fun to be had come October 13th but this time, the gang’s (almost) all together again as Darryl (guitars), Michael (bass), Christopher (drums), and Stoney (vocals) bring you an EP of eerie fall-o-ween tracks including a few new musical creatures and a remix of the band’s first single “Injected”…coming in mere days from Pizza Hell Music!”

In a mini-interview with Sleaze Roxx back in April 2018, Stoney explained how Dirty Rock Scars first began: “For years, my health kept me from pursing anything other than acoustic solo music and now that I’ve found the cold brew of youth I really wanted to get back to the music that originally grabbed me as a kid and the next thing I knew, I had a whole bag of ’70s glam and punk inspired songs. That was the easy part. Being that few are as music obsessed as I, it took a few months of spitting out talented but not insane enough musicians before this crazy gang got together. [Drummer] Chris [Lowery] turned out to be even more obsessed than me about getting together followed by [guitarist] Michael [James] and [bassist] Todd [Love], and finally my old bandmate Darryl [Cliett] hit me up. Somehow, we all ended up at this over a hundred year old plantation house in rural South Carolina where the only neighbors seem to be a few twisted ghosts but that’s cool. They seem to dig the loud music and the aroma of coffee.”