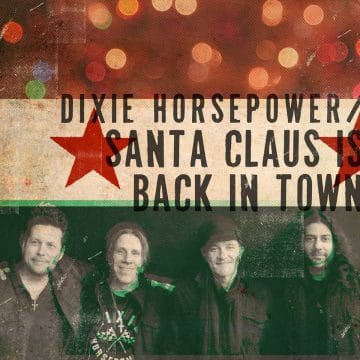 “Yes, we actually learned and played a few holiday songs last December for a couple of shows and this Elvis tune (which somehow I’d never heard ) just rocked my world! I was so in love with it and determined we should record it. We really wanted to say thanks to the folks that follow us and share it with as many people as possible.”

Wikipedia states the following about the song “Santa Claus Is Back In Town”: “[It] is a Christmas song written in 1957 by Jerry Leiber and Mike Stoller, and first recorded that year by Elvis Presley as the opening track on Elvis’ Christmas Album, the best-selling Christmas/holiday album of all time in the United States. The song has become a rock and roll Christmas standard.”

Sleaze Roxx stated the following in its review of Dixie Horsepower‘s self-titled debut EP: “When I first learned of the band name Dixie Horsepower — which screams country — I was not that enthused but the fact that Tesla drummer Troy Luccketta was part of the project meant that I was at least curious to hear the band. As it turns out, Dixie Horsepower can really rock while engaging in their own brand of country rock n’ roll. One listen to the first track “Full Tank” had me hooked. With a solid guitar riff that has some country feel to it, the song keeps an upbeat pedal to the metal style throughout. Singer Kevin Lawson has a great voice and there are quite a few background vocals to back him up. While there is a definite country element to the song, I would deem it more a rock song with some country overtones rather than the other way around.”

Dixie Horsepower‘s cover of Elvis Presley‘s “Santa Claus Is Back In Town” song: