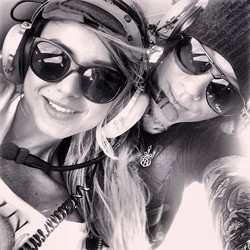 An internal investigation is underway after a rock star and his girlfriend were given a private tour of Las Vegas in a police helicopter for a wedding proposal, reports the Las Vegas Review-Journal.

DJ Ashba, lead guitarist of Guns N’ Roses and Sixx:A.M., posted photos of the tour on social media Saturday. “That was the most incredible day of our life!!” the guitarist wrote on Instagram. “Special thx to the Las Vegas Police Dept. for the most amazing helicopter private tour over Vegas!”

Ashba gave a shout-out to Captain David O’Leary for setting up the tour. A police spokesman confirmed the internal investigation Sunday morning, although no details were released. But department officials were reportedly livid about the apparent misuse of the helicopter, especially in the wake of officer’s death from a helicopter last month.

It’s unclear how O’Leary, who oversees the department’s Financial Crimes Bureau, arranged the tour for the 40-year-old rocker. Ashba, who joined Guns N’ Roses in 2009, called O’Leary a “good friend” on Instagram.

Both O’Leary and the pilot are under investigation, although it was unclear if either were suspended.

Ashba’s girlfriend said yes to the proposal after the helicopter “landed in a field” next to a table with roses and champagne, he wrote. “It was beautiful she didn’t expect a thing, it was magical.”