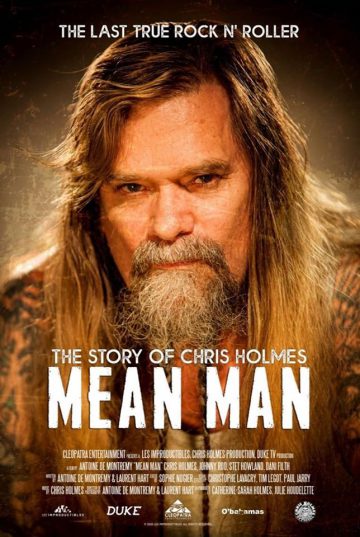 The story of former W.A.S.P. guitarist Chris Holmes is one step closer to being seen as the documentary Mean Man: The Story of Chris Holmes from French filmmakers, Antoine de Montremy and Laurent Hart, will be released on BluRay / DVD / Digital via Cleopatra Records on January 15, 2021.

Amazon states the following about Mean Man: The Story of Chris Holmes:

From iconic guitar player to construction worker, Chris Holmes has lived a life of highs and lows. After losing publishing rights of his own songs and dealing with addictions, the ex-W.A.S.P. member has had to start from scratch living in his mother in law’s basement in Cannes, France. He is now ready to take on Europe with his new band. As we follow him along, he meets many fans and proves that he still is the showman he was as a young and famous rockstar. This musical journey draws parallel stories of the rise, fall and rebirth of Chris Holmes with archives, live performances, interviews and behind-the-scene footages.”

In an interview with The Metal Voice back in October 2020, Holmes indicated: “I have a documentary coming out called Mean Man and it’s the story of the last ten years of my life it comes out Jan 19 2021 and It will be out on Cleopatra. It shows what I have been doing, touring and has interviews with people from the past. The guy followed me around with a camera for a very long time.”