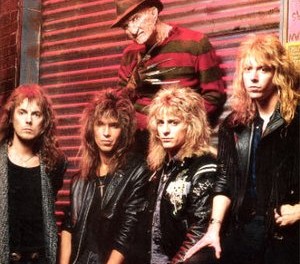 Mitch Lafon recently interviewed Dokken‘s long-time drummer “Wild” Mick Brown on episode 223 of his podcast One On One With Mitch Lafon. 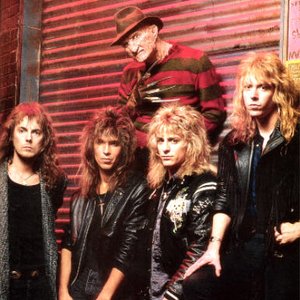 Brown states during his interview on One On One With Mitch Lafon starting at the 22:14 minute mark:

“…Listen, there’s talk of us doing something in Japan this coming up year — I mean at the end of this year. And if that happens and we make it through that, than yeah, maybe there could be some talk of some of those things. But like again, I’m like, one step at a time guys. you know? Like [laughs] I know how we are. Let’s see, let’s see, just get through that — you know, six shows [laughs]. And if we can do that, well than yeah, maybe we can move ahead. But I don’t know, it’s, it’s just up in the air. We’ll see how it goes.”

Brown was asked what prevents Don Dokken and George Lynch from getting along as with people getting older, you just got to let go at some point. Brown replied, “Well, you know you would think so listen some people [inaudible]. It was something that was there from day one and it’s never gone, it’s never going to go away. It never has gone away. And that’s what making me feel a little hesitant about getting together again. I’m like ‘I have already lived this for so many years.’ Jeff and I were like, ‘Oh God. We have to go through this with these guys.’ [laughs] There’s no stopping it you know. So you know, I mean I am just thinking ‘I haven’t seen a change in either one of them really [laughs] so I don’t know what to expect.’ But hey, I am willing to find out you know. In spite of ourselves, we always seem to do well. But that’s what our manager used to tell us. He goes ‘In spite of yourselves, you guys are really [inaudible] and you shouldn’t be because you’re just a horrible bunch of guys together.'”

Brown also candidly stated: “…Listen, if I have to be real honest with you, it’s the money we are doing it for. Not the… I think that is the wrong reason. I think the reason should be we want to play together and I don’t think [laughs] anybody wants to play together but the money that we are being offered to do it, it’s you know, you can’t say no. To me, that’s the wrong reason but there it is.”

Brown also stated (at 24:15 of the podcast interview): “You have to decide — I’m in or I’m out. Let it go and play ball. Somehow, it seems to work out. It’s never very easy and I’m sure it’s not going to be this time either.”

Brown also revealed that he sold his share in the Dokken name to Don Dokken given that he did not want to be involved in lawsuits with someone else making a compromising decision. Accordingly, Don Dokken now controls everything while Brown gets paid by Don Dokken.

Mitch Lafon then posted the following messages on his Facebook page (via Metal Sludge): 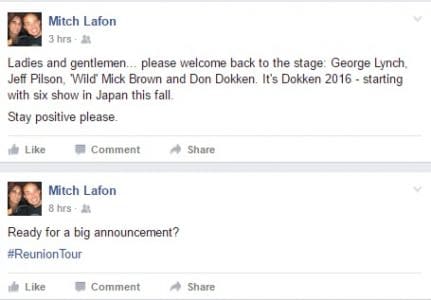