Dokken, Lita Ford and Lynch Mob to tour together in 2020 with encore to feature Don Dokken & George Lynch 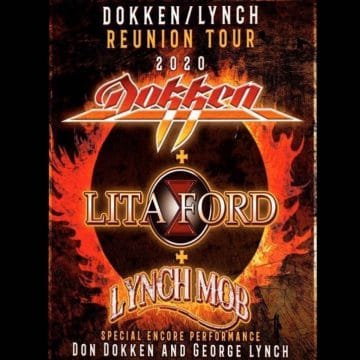 The tour will apparently include a “special encore presentation” featuring Don Dokken and George Lynch.

Presumably, Dokken will consist of Don Dokken on lead vocals, Jon Levin on guitar, Chris McCarvill on bass and whomever is replacing “Wild” Mick Brown on drums.

The Lynch Mob line-up is a bit of a question mark since bassist Sean McNabb stepped down from his position in the band back in mid-November 2019 and drummer Jimmy D’Anda is part of the recently reunited original BulletBoys line-up. Presumably, Last In Line lead vocalist Andrew Freeman will be handling the lead vocals in Lynch Mob but even that is not a given since the band has had four different lead vocalists in the last two years (Freeman, Oni Logan, Robert Mason and Nathan Utz) and with Lynch leaving the door open for Logan to return to the band only six months ago.

Of note, Lita Ford is scheduled to be the opening act for fifteen Alice Cooper North American tour dates from April 1 to 22, 2020.