US dates have been announced for the Dokken / Lynch Reunion 2020 tour, which features Dokken, and presumably Lynch Mob, along with guitarist George Lynch performing with former bandmate Don Dokken at the end of each show. 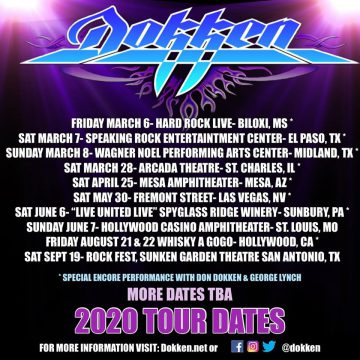 It was previously announced that Lita Ford would be part of this tour package but it n0w appears that the former The Runaways band member will be touring with Alice Cooper in April and later on with Alice Cooper and Tesla. Out of the Dokken tour dates below, Ford only has the April 25th date listed on her Facebook page while her website only mentions the September 19th show.