Dokken have reportedly recruited guitarist Ira Black to play with them for nine shows throughout November and December 2017. There is no word on why Black is joining Dokken or what is happening with current guitarist Jon Levin at this time.

The following message was posted in part on Black‘s Facebook page about one hour ago:

“I’m honored to announce that I will be playing guitar for DOKKEN as a fill in for 9 shows! 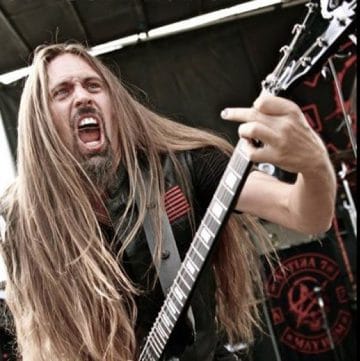 I will start November 2 in Houston, and November 4th at ROCKFEST 80’s in Pembroke Pines Florida with Joan Jett & The Blackhearts, Cheap Trick, Sebastian Bach, Quiet Riot and Steelheart. Followed by 7 shows in December.

I am very excited to be playing with DOKKEN. To play all these great songs live is a great honor, not to mention all these insane George Lynch solos!

I remember when I 13 years old playing guitar on my porch and listening to Tooth and Nail, trying to play these songs…

Imagine if someone told me back then that I would eventually do this, well my mind is blown NOW!!!!

I appreciate you now, more than ever!

Thanks to
Jessica Chase
Jenna Oconnor
Mikkey Dee
⬆️⬆️⬆️
Without these 3 Awesome people, this wouldn’t of happened!”

Wikipedia states the following about Black (with slight edits): “Ira Black (born March 23, 1971) is an American heavy metal guitarist and songwriter. Black has played in over 60 bands since the early 1980s and is best known for his work with I Am Morbid, Westfield Massacre, Metal Church, Vicious Rumors, Heathen and Lizzy Borden.

Black has been a strict vegan for 20 years. While in LA County jail in 2009 on a traffic violation, Black garnered national media attention by going on a 10-day hunger strike when he was refused vegan meals.

Black was featured on the cover of Rockdetector’s A to Z Thrash Metal book, banging his head at the Bang Your Head Festival in Germany 2001 showcasing Black‘s thrashing metal presence.”