Great news for Dokken fans as their classic Beast From The East live album was reissued by Rock Candy Records with all of the label’s usual trimmings. 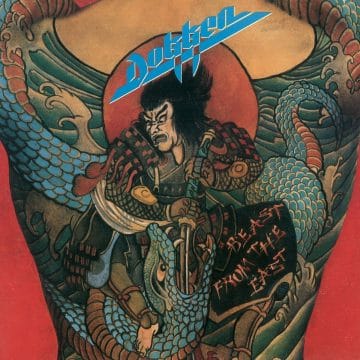 “…The impressive thing about Dokken was that they not only crafted great songs, looking and sounding very much like the archetypical eighties LA rock band, but that they were also an extremely musically gifted unit. Each member was at the cutting edge of their craft, delivering maximum impact in both the studio and on stage. This combined talent produced several big selling albums and paved the way for the recording of this their career-defining double live album. However, all was not well within the ranks of the band. Leader and vocalist Don Dokken and guitarist extraordinaire George Lynch were involved in a long running feud, one that was played out in public, but one which also added colour to the project, giving the band an edge that provided a palpable frisson to their appeal.

In many respects, ‘Beast From The East’ benefits from this tension, giving the music a sense of purpose and energy that easily eclipsed the studio recordings. Taped in Tokyo in early 1988, during an eight date Japanese tour, and released later that year, the record received tremendous reviews and featured seriously impressive versions of Dokken classics such as ‘Dream Warriors’, ‘Unchain The Night’, ‘In My Dreams and ‘Just Got Lucky’. George Lynch’s guitar playing is off the hook, while the rest of the band lay down the law like men possessed. Look out too for a new studio track ‘Walk Away’, giving some indication of where the band might have gone had they remained together.”

Dokken‘s reissued Beast From The East live album can be purchased directly from Rock Candy Records.