With history having been made via Dokken‘s classic line-up taking the stage on September 30, 2016 to play a full set together for the first time in about 20 years, the foursome of singer Don Dokken, guitarist George Lynch, bassist Jeff Pilson and drummer “Wild” Mick Brown were interviewed by Crash & Taylor on the radio station KBAD 94.5 in Sioux Falls, South Dakota, USA. 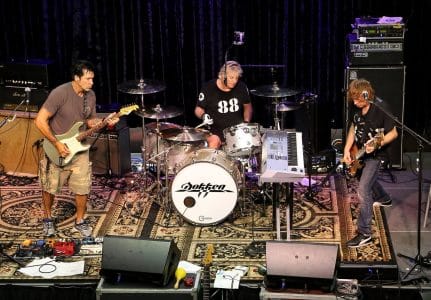 The Dokken classic line-up members were specifically asked what stories and memories together from the past that came right back upon being together again.

Brown was the first to reply stating (as transcribed by Sleaze Roxx): “Well, I just remember a funny gig that we had on a boat that was going around the Hudson River around the Statue of Liberty. And it was a radio — like one of those circle line cruises and uh, so 98.5 people could come you know [laughs] or something like that. And uh, I remember playing on the center deck of this boat but you could only see us if you looked down this door. There was only about nine heads that could look through this door staircase to see us playing. It was really odd. So we’re playing in the boat, we turn you know, we… It was just the oddest thing. I thought, “OK. I’ll remember that one.”

Lynch was asked about his favorite gig with the Dokken classic line-up to which he responded: “Well, I can’t say a specific show but I would say that my favorite shows were not the big giant arena ones because really, a lot of the times, those didn’t sound good and we were always opening up for somebody else. So we’re getting sandbagged you know. They didn’t sound particularly good and they just rush us up there. But when we’d play — sometimes, we’d get off the road and then we’d go play a club, you know. A small club that would be packed to the gills. The walls would be bulging and then we would go in there and be hot and steamy in anticipation. We’d go out there and just rule. It was so fun.” Don Dokken piped in, “And you know all the energy is directed at us.”

In terms of his favorite memories, Pilson stated: “Probably going to Japan to be honest with you. Japan was always really good for us. It was — we’d seem to get along better than even in the difficult days and the shows always sounded amazing. We seem to play better there, probably because it did sound amazing. And the interactions with the fans was just amazing” Don Dokken chimed in, “Yeah. It’s different than in America. I mean, when you have people literally — we want[ed] to go shopping towards the end of the tour so the limousine pulled out in front of the hotel and all the fans clamour over the limo. But we went out the back kitchen door and hopped in cabs, laid down and snuck out the back. It was kind of like Beatlesque and people would do candle light vigils and… But you got to be careful what you say. One night, I as just goofing around from uh… I had been watching one of those uh, March movies. It was called ‘Bananas.’ So on stage, I just said “Bananas, bananas, bananas.” And the next day, people showed up and were throwing bananas on the stage [laughter all around].”

You can read hear the rest of the interview snippet in the video below: