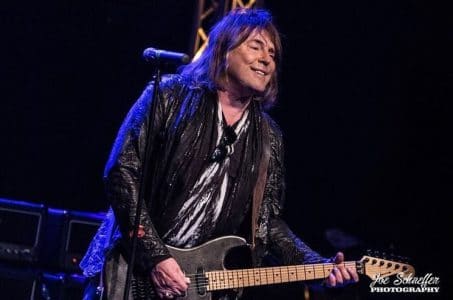 With respect to Cull‘s book, Don Dokken indicated (as translated from Portuguese to English by Marcelo Vieira with slight edits): “I read it. In fact, I helped with a lot of information, but I noticed some inaccuracies in the text as well. Anyway,

as one day I will write my autobiography. I did not tell James everything he would like to know. He kept calling me: “what happened here?”, “What did you do there?”, And [laughs] I replied, “James, I’m not going to give you everything like that. I will not receive a cent for that book.” It is not an authorized biography, but I could have blocked the process. I did not, but there are many, many stories and information about the band that only I know and nobody else.”

In terms of how far along Don Dokken is with his own book, the singer stated: “I started writing it years ago, but I stopped. The biggest obstacle is that my right hand is completely paralyzed [since back in late 2019]. Since I am right-handed, I can’t type. So I bought a microphone, configured the Pro Tools [system] and resumed the project. When I am in the mood, I sit at the PC, turn on the microphone and start talking. But it won’t just be a book about Dokken‘s career and our rise to fame. My book will be much more about my life, my childhood and youth, when I started playing and singing.

There are many things that people don’t know about me, but don’t think that I am going to write something like “The Dirt“. I never overdosed; I never participated in orgies or had problems with prostitutes and drug dealers. In fact, I never used drugs. Everyone knows that George [Lynch], Jeff [Pilson] and Mick [Brown] were addicted and that was one of the reasons why the band broke up, because I could not take those three anymore. That is why my book is going to be different. No “we formed a band, we became famous, we got drunk”; there are already thousands of books like that. Mine will talk about the day I was born until today.”