Dokken frontman Don Dokken was recently interviewed by Mitch Lafon from Rock Talk with Mitch Lafon and he spoke about his 1990 released solo album Up From The Ashes. 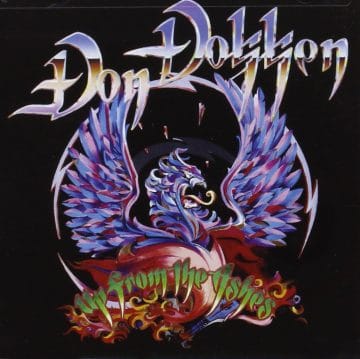 The singer stated (as transcribed by Blabbermouth with slight edits): “I felt pressured. Here I’d come out of this world-famous band, and now the band’s broken up. There were some legalities — I couldn’t use my last name. It was a legal issue. ‘Up From The Ashes’ should have been [released as] Dokken, but I couldn’t, so I had to call it Don Dokken. It wasn’t a solo album; it was just another incarnation of Dokken. It was a great album, but it’s timing. That album came out right when the whole grunge thing was hitting, and the musical styles were changing. I had done what I thought was a classic, straight-up rock and roll record, and I think we got a little stigmatized — ‘Oh, Dokken, ’80s guys, they’re a hair band.’ I hate that term, ‘hair band.’ So we kind of just couldn’t survive the change in taste. It did good — sold almost half a million copies — but it didn’t sell multi-platinum like the previous Dokken records, and the reason we didn’t continue was because I got despondent. I just felt like, ‘The hell with it.’ I put a lot of blood and sweat and tears into that record, and I just figured, ‘What’s the point?’ So I took a break. We all kind of went our separate ways.”

You can read further transcribed portions of Don Dokken‘s interview with Rock Talk with Mitch Lafon at Blabbermouth.

Sleaze Roxx stated the following in its review of Up From The Ashes back in April 2004: “Don had some very seasoned players on this album, as they had spent time in bands such as Accept, King Diamond and Europe. In fact at times it is John Norum‘s guitar playing that upstages the vocalist himself. The music on Up From The Ashes is an extension of Don‘s work with Dokken as he shares his emotions with us very well. I felt this album was very good and it gets two thumbs up!”