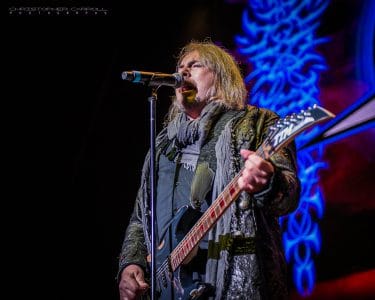 Don Dokken was asked what advice that he would have for young aspiring rock musicians to which he replied (as translated from Portuguese to English by Marcelo Vieira):

“Don’t trust the label, don’t trust the managers, be wary of everyone around you. We pay dearly for being naive. We were broke and signed contracts based on speeches like “we love your sound, we believe in you”. Everything is going wonderfully while you’re up. Bands are like stocks on the stock market; everyone keeps an eye out when you’re making money, getting along. If sales start to fluctuate, you are just one more and are sold as a stock. I remember when the record company called me and said, “Hello, ‘Up From The Ashes’ has stagnated at 400 and a few thousand copies sold, so … this is it, goodbye.” That’s when I learned that everyone’s a crook in the music industry. They don’t care about you. Record companies don’t give you a dime; they advance an X value in the hope that you will make a profit for them. For every dollar you earn, the record company earns eight. Anyway, that’s it: always read each line of the contract carefully and be careful. On the other hand, you don’t have to be rich and famous to be happy. There is nothing wrong with having a normal job if it makes you happy!”

The singer also recalled how he was treated by Geffen Records with his solo record Up From The Ashes as he indicated: “Sure! Up From The Ashes was selling reasonably well. I was at Geffen, which happened to be the same label as Guns N ’Roses, which sold a lot. But after Nirvana signed with Geffen, everyone was kind of left out. “Don Dokken? Who is this guy?””