UK rockers Doomsday Outlaw have released a video for the title track of their latest album Hard Times, which was released via Frontiers Music Srl on May 11, 2018. 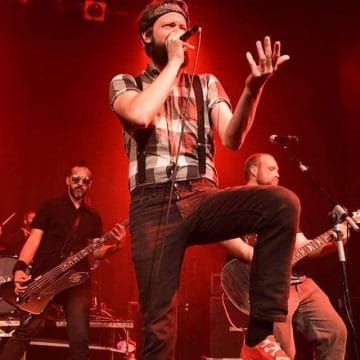 The group’s “Biography” on its Facebook page states in part: “OUT OF THE PRIMORDIAL OOZE … come DOOMSDAY OUTLAW! A ten-legged Armageddon machine rolling out of darkest Derbyshire, spitting heavy riffs and heavier grooves in all directions. Tales of hope and despair to bang your head to and lose your voice.

Releasing their second album in May 2016 to widespread acclaim (see below), the band have set about perfecting their live show. Effortlessly mixing heavy blues stomp with a melancholy tuneful edge, they recall Clutch, The Allman Brothers, Screaming Trees and Led Zeppelin – to name a few.

Doomsday are looking forward to bringing their brand of skull-crushing mayhem to a venue near you!”