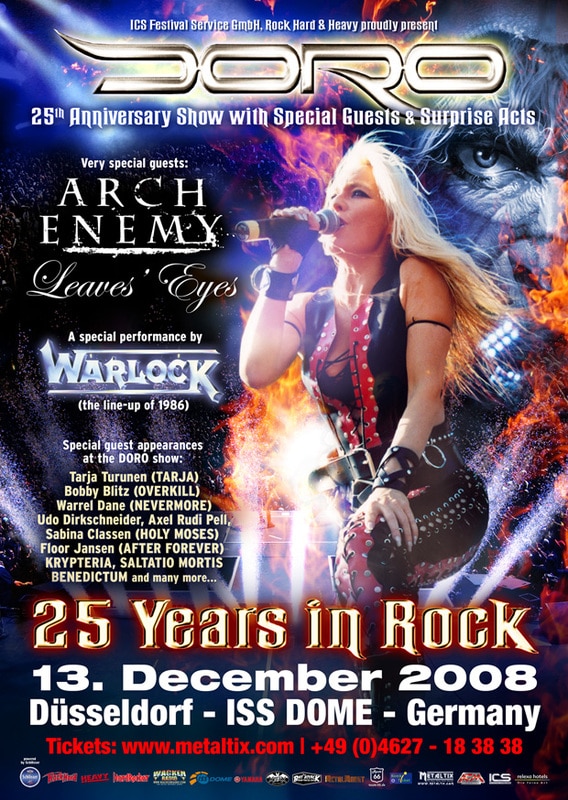 German metal queen DORO will be holding a 25th anniversary show on December 13th at the ISS-Dome in Dusseldorf, Germany.

“The party starts at 2PM with a metal market that all guests can visit for free. Signing sessions with the bands will also be taking place there.At around 4PM the doors open and about one hour later the party finally starts! Just like five years ago (remember December 13, 2003, Philipshalle, Dusseldorf) various bands will rock before the Metal Queen enters the stage and guest musicians will come to join Doro on stage to perform songs with her during her headliner show.

Swedish/German extreme metallers ARCH ENEMY have been confirmed to perform at DORO’s “25 Years in Rock” anniversary event on December 13, 2008 at the ISS Dome in Dusseldorf, Germany. Also scheduled to appear are LEAVES’ EYES and former NIGHTWISH singer Tarja Turunen, among others.

Comments ARCH ENEMY frontwoman Angela Gossow: “I am so excited to rock hard with the one and only Mrs. Doro Pesch! She is not only my teenage idol (‘All We Are’ from WARLOCK was about the only song I liked at school disco!) and basically my neighbour (Cologne — Duesseldorf is right next to each other), but she is hands down one of the nicest, down-to-earth and most beautiful musicians I have met so far. I can hardly believe it’s her ’25 Years In Rock’ anniversary — she is still as youthful as ever! She’s got the power for sure! You don’t want to miss out on this extraordinary event and maybe seeing me and Doro on a stage together! Make sure you get your tickets early!”

Here are now the confirmed bands and guests

A Special performance by
WARLOCK The Line-up of 86