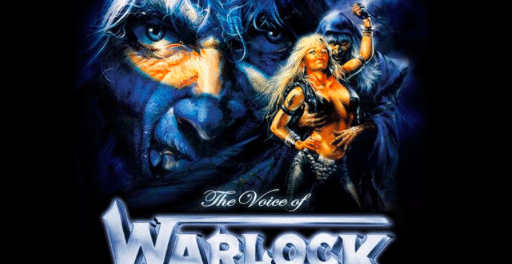 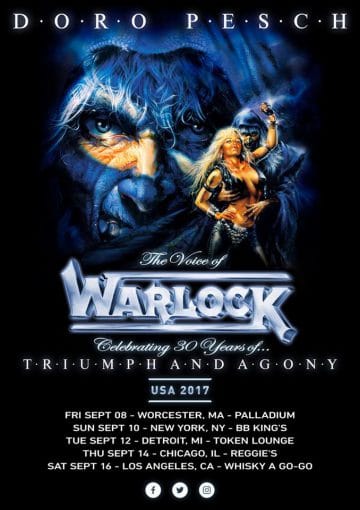 Warlock singer Doro is in the midst of a mini-US tour consisting of five dates in Worchester, Massachussetts; New York, New York; Detroit, Michigan; Chicago, Illinois; and, Los Angeles, California from September 8 to 16, 2017. The five US tour dates are to celebrate the 30th year anniversary of the release of Warlock‘s most successful album Triumph And Agony, and the tour features the return of Warlock guitarist Tommy Bolan.

Doro was recently interviewed by AXS and spoke about how excited fans have been for the shows and her return to the US. Doro stated: “Yes, me too! I love America and touring the United States is always awesome. We’re definitely planning on adding on more dates. But it’s hard, we didn’t know that people would be so interested in [the] Triumph And Agony [anniversary]. But there are people from other cities [who want us to play] so we are planning on doing more gigs, but first these shows.”

Doro is playing the entire Triumph And Agony live on this mini-US tour and spoke about revisiting playing all the songs from that record as she stated: “Yes, it still feels the same when we play the songs. And we’re playing the whole album, which we’ve never done before. It was wonderful to rehearse to play them live. And they’re like top-notch songs as well that somehow they got forgotten when we picked songs for our set-list. And a song like “Make Time for Love” is a beautiful song, and it’s so nice to feel exactly like we felt 30 years ago. And the positive energy is still the same, like no time has passed. It’s the same like when you were in love once and you meet the person again – it’s the same kind of excitement.”

You can read the rest of the interview with Doro at AXS.

Doro performing “Burning The Witches” and “Fight For Rock” at BB Kings in New York, New York, USA on September 10, 2017: