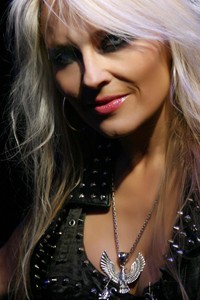 Hurricane Irene gave Doro Pesch a rude shock. On Thursday morning the rock singer took the plane from Dusseldorf, Germany to her second home in New York. When she arrived at her domicile on Long Island, instead of her neat house on the beach Doro only came upon a heap of ruins — the result of Hurricane Irene which had been raging over New York last weekend and had brought big floodings to the east coast of the US.

“The damage is disastrous”, Doro states mournfully. “The whole ground-floor was flooded. It stinks, electricity failed and everything’s wrecked inside of the house. From the TV to the fridge to the furniture. Everything’s grime-stained, defective, unusable.”

Doro continues, “The worst thing is that pieces of my stage costumes and lots of my souvenirs and presents from fans from all around the world are lost forever now.”

Actually the rock queen wanted to prepare for her two live shows in New York and Chicago on Long Island calmly, which she’ll play next week over the course of her jubilee DVD’s release ‘DORO – 25 Years In Rock’.

“The shows will take place of course,” says Doro. “For now, I’ve found accommodation in an hotel in New York and will have to see where things will go from here. I saw the pictures of Irene on TV when I visited my mother in Germany on the weekend. When a red rubber raft appeared canoeing through a road on Long Island, I’ve already assumed the worst.”

And the fears were even surpassed. In spring, Doro Pesch had sat by the pier in front of her house to make use of the idyllic atmosphere for writing songs for her new album that will be released in 2012.