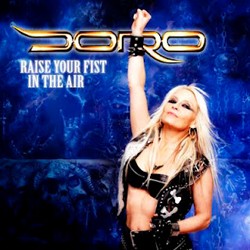 Doro’s ‘Raise Your Fist In The Air’ EP Now Available

The Queen is back — as Doro Pesch returns to the record stores. Almost four years after the highly successful album ‘Fear No Evil’ (#11 in the German album charts) the Queen of heavy metal has just released her new EP ‘Raise Your Fist In The Air’ via Nuclear Blast.

“This is the first record for my new label Nuclear Blast”, Doro explains. “Thus it’s a very special album, because the cooperation means very much to me. So I hope that in the end the fans will love the EP and the album as much as I do”

So get your copy in the Nuclear Blast online shop at www.nuclearblast.de/suche/doro or via Itunes (including a digital booklet) at bit.ly/dororaise.

Doro’s new album ‘Raise Your Fist’ will be released on October 19, 2012 through Nuclear Blast.

Regarding the upcoming studio album Doro stated, “Most important to me are the power hymns “Raise Your Fist In The Air” and “Victory,” which will also be available on the forthcoming EP! Both songs have been played live on our last tour and also made last year’s Wacken Open Air shake! “Raise Your Fist In The Air” will also be available in French… which is going to be very interesting. For the diehard fans of German songs like “Fur Immer” (“Forever”), there are two songs in the same vein — sensitive and quite dark “Human Rights” and the very emotional “Engel” (“Angel”). There are also a lot of fast songs like “Little Headbanger” and various fist-pumping ones featuring amazing guests like Gus G (Ozzy Osbourne, Firewind) on “Last Man Standing” which fans will for sure dig live. We also have a song that honors the late Ronnie James Dio called “Hero” and another highlight named “It Still Hurts” featuring Motorhead’s Lemmy Kilmister. The cover artwork has once again been created by British artist Geoffrey Gillespie who is a close friend and companion since he made it into the Guinness Book of World Records for his ‘Triumph And Agony’ cover as the biggest album cover in the world. Since then, he’s done ten covers for us!”