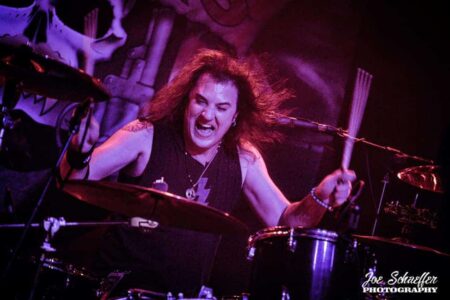 The guitarist was asked who else is in Pearcy‘s solo band at this time to which he indicated: “The Stephen Pearcy band line-up for 2021 is Scot Coogan (LA Guns, Ace Frehley), Jerry Montano (Danzig), Frank Wilsey (Arcade, Sea Hags) and myself, who has played with the Pearcy band for decades. I also most recently played guitar for Bow Wow Wow.”

With respect to the status of Pearcy‘s follow up album to View To A Thrill, Ferentinos stated: “We have been working on a follow-up to “View To A Thrill” for the last few years. The shut downs have really sidelined the whole industry and everyone is still trying to figure out how to navigate the future. We released a few demos this past year just to instigate some attention. “All That I Want” actually got a great reaction on YouTube. “Girls On Film” was a fun cover that Stephen wanted to do. He was a big Duran Duran fan back on the early 80’s. That cover also got a lot of press.”

In terms of the direction of Pearcy‘s upcoming solo album, Ferentinos revealed: “The new record will be on par with Pearcy‘s last two releases, “Smash” and “View To A Thrill.” We write them like a movie trilogy of sorts so the storyline continues. Danger, excitement, romance, and retribution. Our favorite ingredients!”

Wikipedia summarizes Coogan‘s career as follows (with slight edits): “Scot Coogan is an American musician known for his accomplished drumming and vocal skills, working as both a session and touring musician. Scot resides in Las Vegas, Nevada, where he records, performs and has worked as a counselor at Rock and Roll Fantasy Camp. Scot is also related to Jackie Coogan who is responsible for the Coogan Act that was put into place in 1939.

Coogan has worked with groups such as Brides of Destruction featuring Nikki Sixx, Ace Frehley, Violets Demise, Ednaswap, Parade of Losers, Annetenna, Sinéad O’Connor, Peter Yorn, Vanilla Ice, and Otep. Aside from drums, he sings, plays guitar, bass and piano. Coogan is currently the drummer in the Tracii Guns and Phil Lewis version of L.A. Guns.”