Whitesnake lead guitarist Reb Beach recently stated in an interview with All That Shreds that he was now the “music director” now that Doug Aldrich was no longer in the band. In particular, Beach indicates that he had no say in the band and did not participate in the writing when Aldrich was in the group. 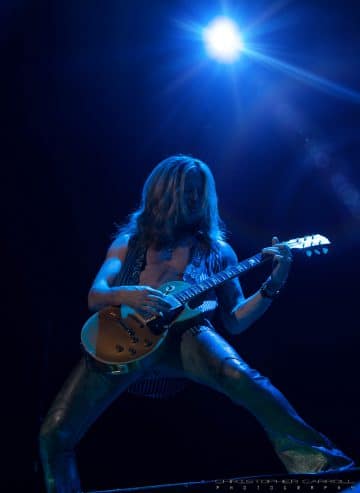 Beach and Aldrich joined Whitesnake in 2002 with Aldrich leaving the group in 2014 and joining The Dead Daisies. Whitesnake released two studio albums during that time — Good To Be Bad in 2008 and Forevermore in 2011 — with all of the songs being co-written by Aldrich and the group’s leader and long-time frontman David Coverdale.

Aldrich has now responded to Beach‘s assertions in an article posted by All That Shreds. Aldrich stated in part:

“Whitesnake is David‘s band.  He’s in charge of it. Reb says he is now the MD; I was never the MD. I was just the guitar player, and David asked me to split up the solos for a two-month tour in 2003, and I gave Reb his choice. He wanted to do “Here I Go Again,” so he did Here I Go Again. “Slide It In” “Give Me All Your Love Tonight” all songs that were potentially always going to be in the set.

I started to hear from friends that he was complaining about me or whatever. I just didn’t let it bother me. I just kept going, kept my head down and tried to do everything the best I could. But I was not in charge. David is in charge. I just brought David a bunch of music that he liked. It was effortless. We had a very natural, very organic thing. So I don’t know what happened. I know that Reb wrote a letter to David saying he wanted to be their leading guitar player after I left. So David said, “Yeah, let’s give it a shot.”  I am very happy for him.”

Aldrich continued: “I didn’t stop Reb from writing ever.  I never would prevent anyone from writing a good song. Reb never sent me one song idea. He likes to say that I was the MD, but he never sent me one idea. Not one. He sent them to David. I never heard one idea from Reb, ever. All I did was do the best I could for the band. And by the way, every time we put out a record, with my songs, all Reb wanted to do was play the hits. Why are we playing new songs? Let’s just play the hits, play the hits. And I said, Reb, I appreciate that I understand how you feel, but to move a band forward, you need to put out new music, and you need to support it, which David did. So, we wrote some killer stuff.  I stand behind Forevermore. Good To Be Bad is my favorite record that we did.”

You can read the rest of what Aldrich had to say at All That Shreds‘ website.