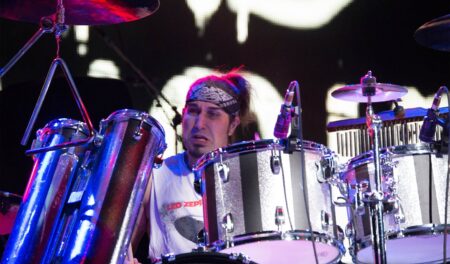 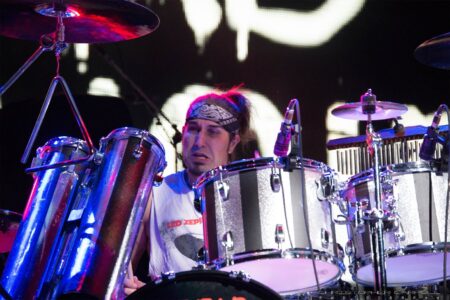 In terms of the sonic blueprint for Radiance, Aldrich indicated: “We were writing heavy grooves, Glenn [Hughes] was doing his thing with melodies and lyrics, and we just wrote some music. We didn’t talk about it so much, except that we wanted to write simple songs and, in the classic rock vein, kind of ’70s-based. Then we went in the studio with [producer] Ben Grosse, and Ben brought a lot sonically; he had a sound in his head that he was going for. We didn’t talk about the album being heavier; it just ended up heavier. But I agree with you; it’s my favorite album that we’ve done so far.”

Aldrich continued: “I like the songs. I feel like the sound of the album is really thick and cool, and I think we just gelled more on this with regard to the songwriting. Another reason is Brian Tichy coming back to the band is a huge thing. He brings it on this album. You listen to some of the stuff, like the outro section of “Not Human,” where Brian’s just going off. And his grooves are just so thick. It’s just killer the way he plays.”

DiCecco noted that Tichy complements the dynamic and that it feels that the band is firing on all cylinders to which Aldrich noted: “Yeah, I agree. It’s mainly because of [Brian]. He is also a guitar player, so when I’m doing certain things, I know he knows what I’m doing. And he knows how to play off that really well. Also, when it comes to – say, for example – we’re working on a song and all in the studio together playing simultaneously. Say we’re playing something … Brian will go, “Do you hear it more with an open hi-hat eight-note feel? Or do you hear it more closed hi-hat quarter-note? And what about the kick pattern? What are you guys hearing?” Immediately, he starts – in a very musical way – experimenting a little bit with the groove, and suddenly, it’ll be like, “That feels good.” A lot of drummers don’t necessarily go that deep; they’ll come in and play whatever was on the drum machine or demo. Brian loves to experiment and try things, and it really helps the songs.”

You can read the rest of the interview with Doug Aldrich at Vinyl Writer Music‘s website.

The Dead Daisies‘ “Face Your Fear” video (from the Radiance album):