The Dead Daisies guitarist Doug Aldrich was recently interviewed by Roppongi Rocks and spoke about his KISS audition way back in 1982 to replace guitarist Ace Frehley.

The following is an excerpt from the article / interview with Aldrich done by Roppongi Rocks:

As Aldrich was just starting out as a guitarist, he auditioned to join Gene Simmons, Paul Stanley and Eric Carr as Ace Frehley’s replacement in KISS. “It was 1982. I had moved away from my parents’ home in ’81. I told them I was going to go to college and they gave me a budget. They were gonna help me get set up in an apartment and make sure I was OK. I went to the college one day and I decided it’s not for me anymore. I always had my guitar with me. I came to California because I knew that music was original in California. I was born in North Carolina but at the time I was living in Philadelphia and all the bands were playing cover music. I had a dream of the California lifestyle that I wanted. There was something about it that I just loved. I had visited a couple of times and I loved it. I was just a kid, so I drove up and I went to school one day and I quit. Then my parents said ‘OK, well then you’ve got two weeks to find a job.’ So I got a job and I started taking care of myself.

Ever since I was focused on the guitar. I immediately got a band together, so within three or four months I was playing in the clubs, in some of the famous Hollywood clubs. A girl said that KISS was auditioning guitar players and that she thought I’d be good. I thought she was joking but a couple of weeks later, we played the same place and she brought Eric Carr with her, which was her boyfriend. It was weird because at that time you hadn’t seen these people’s faces. So, I was looking at him like ‘He’s got the exact same hair. It does look like him.’ Of course, it was him. He said ‘I want you to come down to the studio and meet the guys.’ At this time, I didn’t have a phone, so he called me at a music shop where I was working. My parents never told me about paying bills. One month goes by and my phone got shut off.

So, he called me at the music shop and I went down and I met Gene and Paul. They were singing backgrounds. I was kind of test demoing some of their tracks in the studio and Gene said ‘It sounds really good, Doug. Do you ever use the major scale?’ And I said ‘Major scale? What is that?’ He goes ‘Oh, you know: Do Re Mi Fa So…’ I’m like ‘Oh! I know that! Yeah, I know that one.’ It clicked. I didn’t know anything about music. I knew how to play certain things but I didn’t know about music. It was a little embarrassing. But I did play it and I played well enough that he invited me to go to a rehearsal situation and play live. That was my first time playing through multiple Marshalls. There were four Marshall stacks just for me. It was in a huge airport hangar. We played three or four songs and then they called me back a few weeks later. I thought ‘Wow!’ 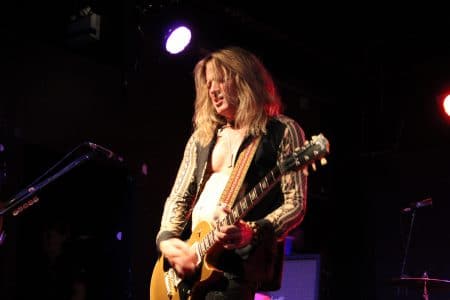 To be honest, I wasn’t the biggest KISS fan. I was more a Led Zeppelin fan. But I was impressed and I thought I can make this work. I make it work to be in KISS! Haha!! But I go down to the second audition and I did play pretty good but I could tell they were kind of like ‘This guy’s too young.’ They were talking about actresses and going to parties. At that time, ramen noodles were really big in the US. You could buy ’em for ten cents a pack. I would just buy three dollars’ worth and that’s how I lived. Ramen noodles! So, I just couldn’t relate to their conversations.”

“So, I didn’t get the gig and Eric said ‘You did great! You were pretty close but I think you’re too young. We found a guy we think is going to work out.’ Which was Vinnie Vincent. But I had Gene’s number. Six months later, they are on tour, promoting their record and I told my friends ‘I’m gonna call Gene and get us tickets!’ All my friends were standing behind me and I got on the phone and I called his house. It was like a party situation. I go ‘Gene, this is Doug Aldrich. Do you remember me?’ He goes ‘Lose this number.’ Click! Haha!! I turn around to my friends and go ‘I don’t think we are gonna be able to go, guys. I’m sorry.’ It was like ‘Man, that’s not cool. He hung up on you!’ Later, Gene wanted me to join a band called House of Lords. I said ‘Gene, do you remember the last time we spoke?’ He was ‘Yeah, you called my house.’ I was like ‘Yeah, you hung up on me!’ He’s awesome. I love him. You know what, you listen to those old KISS songs and you’ve gotta give them credit, man. Those are some good tunes!”

You can read the rest of the interview with Aldrich at Roppongi Rocks.