The Dead Daisies and Revolution Saints guitarist Doug Aldrich was recently interviewed by Andrew Catania of All That Shreds. 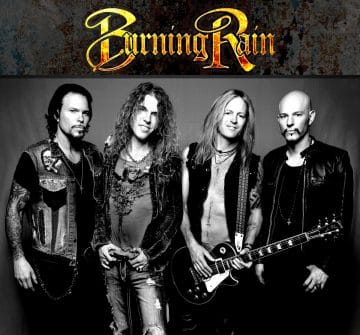 Aldrich was asked what his plans were for 2018 to which he stated: “The Daisies are on hiatus right now. Hopefully touring in support of the new Revolution Saints album. I’m in another band with Keith St. John called Burning Rain. We’re going to get together and record an album and do a tour.”

The band released two albums in Japan and Europe, Burning Rain (1999) and Pleasure to Burn (2000), respectively, before going on hiatus due to Aldrich‘s involvement with Dio and Whitesnake and St John‘s involvement with Montrose. Aldrich and St John re-activated the group with a new rhythm section, veteran bassist Sean McNabb (Dokken) and drummer Matt Starr (Ace Frehley), and issued a new album, Epic Obsession, in 2013.”

Sleaze Roxx stated the following in its review of Burning Rain‘s last album Epic Obsession: “I’m starting here by tipping my hat to the production — this record sounds rich, vibrant, warm and edgy, evoking a more traditional feel. “Sweet Little Baby Thing” and the sleazier “The Cure” (the latter carrying a brooding crunchy riff) lead the way to “Till you Die” which is just about saved from its lyrics as Aldrich conjures an exhilarating Steve Vai-esque workout. Burning Rain co-founder and vocalist Keith St. John is on fine form and delivers the obligatory chest-beating acrobatics with ease, but it’s really when the band drop the posturing and stretch out that they really connect.”

You can read the rest of the interview with Aldrich at All That Shreds.

Burning Rain “My Lust Your Fate” is taken from the album “Epic Obsession” out on Frontiers Records.My “Lust Your Fate” digital single will be released on Apr…