The Dead Daisies and former Dio and Whitesnake guitarist Doug Aldrich was recently interviewed by Roppongi Rocks and spoke about getting approached to join The Dead Daisies while on tour with singer/bassist Glenn Hughes (Black Country Communion, Deep Purple, Black Sabbath, Trapeze).

The following is an excerpt from the article / interview with Aldrich done by Roppongi Rocks (with slight edits): 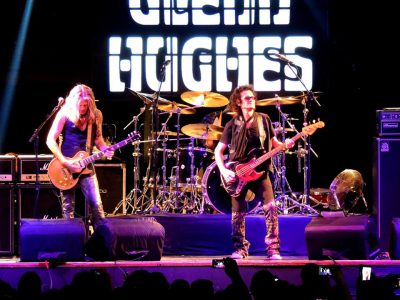 In the year leading up to joining The Dead Daisies, Aldrich was touring Europe, South America and Japan with Glenn Hughes (ex-Deep Purple, Trapeze, Black Sabbath) and Swedish drummer Pontus Engborg. In The Dead Daisies, he replaced Richard Fortus who was invited back to tour with Guns N’ Roses.

“The Dead Daisies had asked me to fill-in on some dates because their guitarist had gotten injured. He had a motorcycle accident, Richard. I had already committed to Glenn to come to Japan.” The Dead Daisies management asked Aldrich if he could fill-in on tour around November-December 2015. “I can’t, I’ve got two shows in Japan. I can’t cancel, it’s not cool,” explained Aldrich his commitment to the Glenn Hughes tour. “The following year, in March, we were going to do the US. To be deadly honest with you, Glenn changes his mind all the time. One minute he was ‘I don’t know if I should do a record’, the next minute ‘We should do a record together, Doug’. I wasn’t really sure where he was going. I wasn’t against any idea, but there really wasn’t a set plan.

Then I got the call that The Dead Daisies were looking for a guitar player, full-time, because Richard is going back on the road and they were gonna make a record. And I thought ‘Sounds like fun’. They’re my friends, great guys. They gave me the schedule and it clashed with the dates I had with Glenn in March. So I said ‘I can’t do that. I am committed to Glenn and I am not going to change it.’ They were very kind about it, The Dead Daisies. Everybody was involved, the producer… ‘It’s the only time we can do this!’ Everybody somehow made amends and moved it, so I was free to continue with Glenn in March. We didn’t know what the schedule was going to be after that, so I could’ve done more stuff with Glenn, but there was no commitment. But he cancelled the dates when he found out I was doing The Dead Daisies.

It was always a ‘Glenn featuring Doug’. That was the deal. He had asked me to do it. I said ‘That’s alright as long as we play a Whitesnake song.’ That’s kind of where it started to go a little south. He goes ‘I’m not feeling that song’ and I say ‘Alright, I sing it’. It was in Tokyo. I felt like he wasn’t fair… Then he sang it and it was fine. But he was not happy with my doing The Dead Daisies and I’m like ‘What’s wrong with you? I’ve made these guys change their whole schedule for you, so that I can do the dates I promised I would do with you.’ Besides the fact we knew he was going into the Hall of Fame, so I said ‘Maybe at that point, Glenn, if you’re not sure what you should do, maybe you should really just focus on you and your solo situation and not worry about whatever baggage I got going.’ That’s one of the things we talked about, that he should focus on exploiting his fame more. Which is what he’s doing right now. I was prepared to carry on, but he didn’t want to. So, I was like ‘Cool. If that’s how you want it to be, I get it.’”

You can read the rest of the interview with Aldrich at Roppongi Rocks.