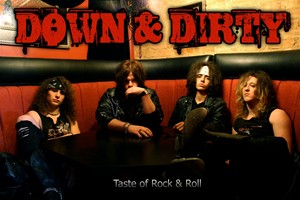 “We want to influence the next generation of musicians as our idols did for us!”

Chicago’s Rock ‘n’ Roll brigade Down & Dirty will tear up the stage Friday, August 19th in downtown Joliet, Illinois at MOJOES. The doors will open at 6:30 p.m., and the show starts at 7:30 p.m. There will be opening acts by Metal College and Delightful Downfall.

“We are continually growing not just as a band, but also as friends and brothers,” lead guitarist L.A. tells Sleaze Roxx’ Elle Fassler.

The band all started when L.A. first moved to Illinois where he met Ryan in Junior High School. They began playing cover songs of bands like KISS and Deep Purple, and then eventually started writing their own music.

“We were on a journey to bring back some of that good time, good feeling Rock ‘n’ Roll we had grown up on,” says L.A.

Majyk joined when they had their first band called Skizm, which later evolved into their current name Down & Dirty. L.A. and Ryan discovered Majyk when he signed into the school choir. Joey The Kidd was the last member that joined the band. “Once we met him… we knew he was the missing piece of the puzzle,” says L.A.

Their ultimate goal as a band is to make music for the rest of their lives, “music that can make a difference, cause a reaction or expand on an emotion, and then share it with the world.”

Check them out on facebook at www.facebook.com/downndirtychicago. Tickets for the show are $10 at the door or $8 in advance. The address to MOJOES in downtown Joliet is 22 West Cass Street in Joliet, Illinois 60432-416.