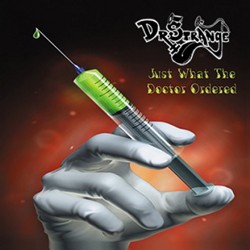 Back in the late ’80s and early ’90s, the Hollywood Strip was flooded with bands, wanna-be bands, and even big-haired rockers who looked like they belonged in a band. Hell, if you had the right look, enough make-up, and enough money to afford some worn out instruments — you were a band! However, there was one band that didn’t fit the mold at all. No make-up, no Aquanet teased hair, no Spandex with cowboy boots — none of the gimmicks. And best of all, they could all actually play their instruments, and play them well!

We are referring to Los Angeles’s Dr. Strange. Dr. Strange was no frills and no gimmicks. They wanted the music to do the talking and that’s where they put all their efforts. This was quite evident when, after winning a Battle Of The Bands (under the name Vision), the four members up and left Tucson, Arizona, changed the band name, and enrolled at the Musician’s Institute in Los Angeles.

The band soon settled in Orange County to perfect their set and continue their song writing. While there, they polished their skills at clubs like Jezebels, Goody’s, The Marquee, and the Red Onion. Dr. Strange was a young band in comparison to their contemporaries. At the mere ages of 22, lead Vocalist Matt Knox, guitarist David Perez, bassist Jim Finley, and drummer Curtis Wynkoop amassed a loyal following. With their live show honed, Dr. Strange felt comfortable moving towards the more established clubs in Hollywood. They played them all — The Roxy, The Troubadour, The Whiskey-a-go-go, Gazzarri’s, Hollywood Live Underground, The Central, and The Batcave. In fact, Dr. Strange received a personal hand-written letter from Diane Gazzarri about how impressed she was with the show and offered the band an open invitation to return any time. This seemed to be a common theme amongst club owners and promoters and led to many return gigs for the band.

Here it is, approaching twenty-five years in the making and there is renewed interest in all things that were part of the heyday of Hollywood. So when Nashville-based FnA Records approached Dr. Strange to release an album of their material from back in the day, the band jumped at the opportunity.

So what can one expect from the newly released Dr. Strange album entitled ‘Just What the Doctor Ordered’? One thing’s for sure, these young gentlemen made sure that the recordings were done properly with what was available at the time. The sound is phenomenal: the levels are right, and the listener can easily decipher not only each instrument, but especially the four-part harmonies that the band was known for creating. If you’re looking for a comparison, they lean heavily towards Van Halen meets Tora Tora meets Extreme. If you ask the band, you’ll get an answer more like, “Take a strong rock rhythm and add in little bits of funk, blues, and even a dose of southwest flair at times.”

‘Just What the Doctor Ordered’ is a 10 track solid hard rock album, well recorded, and played by a band that really knew their instruments and what they wanted to achieve. Of course, the listener will find a couple ballads as is commonplace on any hard rock album; however, they are not your “Every Rose Has Its Thorn” or “Heaven” type of ballad. These, like all the songs in this collection, are finely crafted, and well-written tunes. The album is adorned with true-to-the-feel ’80s style artwork, and some are even saying that this is FnA Records’ best artwork to date.

Do yourself a favor and follow the Doctor’s orders and pick up your copy of ‘Just What the Doctor Ordered’ today at fnarecords.net. Take one dose daily and get back into the groove.