Drama Queen have a new lead vocalist in Matt Elder who has replaced Tee Sing who handled the lead vocals on the band’s self-titled debut album, which was released back in March 2018. The Drama Queen line-up is rounded up by guitarist Matt Vogt, lead guitarist and keyboardist Jim Michelsen, drummer Rob Pace and bassist J-Ro Rostamo. 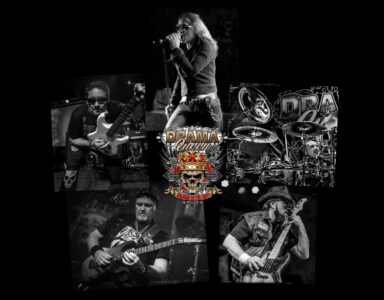 Speaking to Sleaze Roxx, Pace indicated: “The old singer Tee Sing is no longer with the group. His last show with us was on July 15th at Rockfest in Cadott, Wisconsin [USA].  His departure was due to family obligations and time constraints to where we were not able to play shows. We wished him the best of luck in the future. The split was mutual and there were no hard feelings.

We put an ad out there in numerous locations and after dozens of auditions, we finally found our singer.  On November 3rd, we announced Matt Elder as our new singer. He is a great singer, frontman and most of all, a great guy to be around. This is definitely going to be a refreshing change that is dubbed as Drama Queen 2.0. Matt comes from Wisconsin and has been out there in different bands for some time now. We are looking forward to him bringing his experience to Drama Queen.

Currently, the work has begun to get all the songs down with Matt. We are anticipating to start playing live in the February/March time frame. Later on down the line, there is a great  possibility of us recording new stuff with Matt. However, for now, we are looking forward to getting out there and playing live again. This new show will be something to see for sure.”