Italian rockers Dream Company, who have been around for 13 years and have reportedly played over 600 concerts, have just released a video for their debut single “Days of Blue” from their first album The Wildest Season.

The following message was posted on the group’s Facebook page on September 17, 2019 (with slight edits): 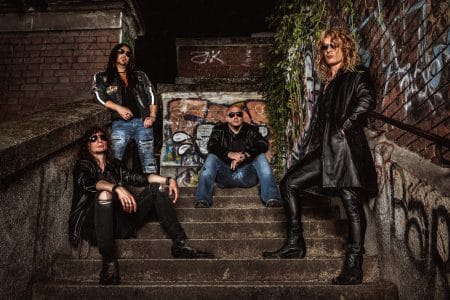 Our first single “Days in Blue” from our first album “The Wildest Season” is out now!

We wanna thank our video maker Maurizio and Moviedel Productions for the incredible job on and off set. Special thanks to the amazing lead actor Pietro F. Baroncini for his heartfelt and intense performance, to our special guest Manuela Zarinelli.

To our producer Mario Percudani — we can’t thank you enough for making this happen and the whole Tanzan Music staff, Edoardo Giovanelli, Apollo Negri, Daniele Mandelli, Lorenzo Di Girolamo. Thanks to Alessandro Del Vecchio for the amazing master and last but not least: thank you RNR Home and Rock’n’Roll Milano for being proud rock n roll ambassadors and for allowing us to shoot at your amazing locations! You rock guys!

Thank you to The New Wave of Hair Metal‘s Facebook page for posting about Dream Company earlier today.