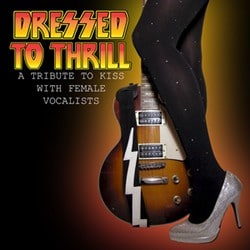 ‘Dressed To Thrill: A Tribute To KISS With Female Vocalists’ Now Available

‘Dressed To Thrill: A Tribute To KISS With Female Vocalists’ is the latest album paying tribute to legendary rock band KISS. The 11 song compilation, completely sung by women, can be purchased through Genterine Records at www.genterine.com

From Radio Cult’s rocking cover of “Detroit Rock City” to Killer Kowalski’s punk edged version of “Love Her All I Can”, ‘Dressed To Thrill: A Tribute To KISS With Female Vocalists’ proves that every KISS is better with a lady involved! Italian rockers Hollywood Groupies deliver a blistering version of “C’mon & Love Me”, Viva La Venus contributes a smokin’ cover of “Parasite”, and October Layne knocks you off your feet with an unexpected acoustic version of “A World Without Heroes” — plus many more.

Genterine Records was founded in 1998 when the newly formed company took over the releases of Counterpoint Records. Although the compilation CD ‘A Collection Of Curiosities was’, in 1998, the last release by Counterpoint Records and the first project for Genterine Records, the label was officially launched later that year with the release of the Cobweb Strange album ‘Sounds From The Gathering’. The relatively small roster of artists allows for each album to receive the attention that it deserves and ensures that no album released by Genterine Records will become lost beneath a pile of other albums or forgotten about due to popularity of other artists on the label.