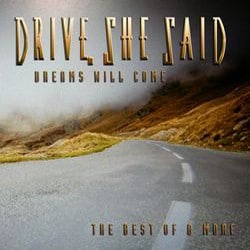 Drive, She Said Return With ‘Dreams Will Come’ In May

Drive, She Said will return with a new album entitled ‘Dreams Will Come: The Best Of & More’ on May 21st. The upcoming CD will be released on Metal Heaven Records – www.metalheaven.net.

DRIVE, SHE SAID, the team of Mark Mangold and Al Fritsch has now 6 CD’s under their belt. Formed in 1988, and having released their first album on CBS Associated in 1989 it’s a fairly typical story: critically acclaimed album, dropped from American label (in the wake of the new grunge movement), same record is well received in Europe and becomes number one on various highly respected UK periodicals, members win top honors in polls and tours UK and various parts of Europe, and go on to release 2 more records for Music For Nations, and then after a bit of a respite, another two records for the Frontiers label (one of them a partial compilation). The band’s sound is characterized by Al’s stellar vocals, anthemic songs, scathing musicianship and deep tapestries of keys and guitars.

Upon being asked to play at Firefest in October of 2009, Mark and Al jumped at the opportunity and put together a stellar band with Jon Bivona (on guitar), Mike Sorrentino (on drums) and Paul Ranieri on bass. Encouraged by the wonderful turnout and generous response at Firefest, the band signed with Georg Siegl at the prestigious Metal Heaven to do a combination compilation and original record. Mark, having written “Fool’s Game” (Michael Bolton’s first single) and “I Found Someone” (Cher’s comeback tune), was happy to record those songs (also played in the band’s set) with Jon Bivona doing the guitar honors. Also two new songs were written (one actually on the evening of the Firefest gig in an explosion of appreciation and enthusiasm) called “Dreams Will Come” and the heavier kick ass “Try To Let Go (FukUUp)”.

Al, who plays every instrument on “Dreams Will Come”, got an opportunity to show off his multi talents. “Try To Let Go”, is a long overdue duet between the two, and features a trade off between Mark and Al. The band is planning a summer tour and plans to keep the ball rolling in support of it’s signature melodic rock approach.