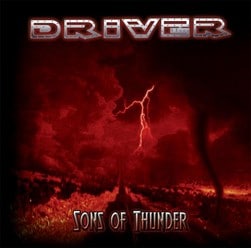 The worldwide release of Driver’s new album ‘Countdown’ is coming soon. The CD will be released on the same labels as Driver’s previous effort ‘Sons Of Thunder’, and available worldwide via AOR Metal Heaven (Europe), King Records (Japan), and RockZilla (USA).

‘Countdown’ is a mixture of brand new material and several rescued-from-the-vaults demo gems, which interlock seamlessly for a classic Driver-style album, aided by Roy Z’s emphasis on vintage production values that harken back to the glory days of early 80’s heavy metal ala Dio’s ‘Holy Diver’ and Ozzy Osbourne’s ‘Diary Of A Madman’.

Driver is a classic heavy rock outfit that was formed in Los Angeles, California out of the ashes of Joshua and Gypsy Moreno. The band was one of the top local acts at the height of melodic hard rock in the late 1980’s and issued a widely circulated 5-song cassette EP demo in 1990 that garnered the band a dedicated worldwide following.

Driver was ultimately denied by major labels with the emergence of the grunge rock scene that dominated the musical landscape during the early 90’s, yet Driver has attained cult status as one of the most underrated hard rock acts of their time, and it has held steadfast throughout the years.

Since then, the two main writers and members of Driver — powerhouse vocalist Rob Rock and acclaimed guitarist/producer Roy Z — have forged ahead to garner long successful careers in the music business. Coming together to reform Driver in 2008, Rob Rock and Roy Z finally got the chance to release the album they intended to deliver back when, 2008’s ‘Sons Of Thunder’ — available for purchase at www.driverofficial.com.