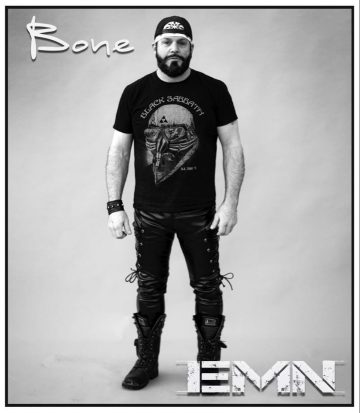 The drummer was asked how he landed the gig with Every Mother’s Nightmare to which he replied (with slight edits):

“I’m coming up on two years with EMN and it’s been a great gig for me. It was a great fit from the first audition. It’s funny because [bassist] Troy [Fleming] and [lead vocalist] Rick [Ruhl] always say “How the hell have we all lived in the same city all these years and not known each other?!” I was hanging out at a local watering hole two years ago with some of my musician buds when Rick came walking up. I knew who he was since I’d seen them play from time to time over the years. He knew the guys I was hanging with and they started shooting the shit. My buddy Tracy asked Rick how things were going with EMN and he said “We’re looking for a new drummer.” Tracy, without hesitation, points at me and says “That’s your guy right there.” Rick and I talked for a quick minute and that was it. I didn’t think much of it at the time. There was alcohol involved and since I was an unknown, I figured they’d go a different route.

As luck would have it I went to high school with their tour manager and Rick’s long time friend. A couple of weeks went by and I got a message asking if I was interested in the gig. I said “Hell yeah!” The next question was “How easy is it for you to travel?” I replied “My kids are grown, I’m self employed, and I’ve got a valid passport.” They gave me a set list and I went in three days later and we blistered through about eight songs. Two more rehearsals and we hit the road for a few shows. They officially offered me the gig after the first show and here we are.”

You can read the rest of the interview with Allan Bone at HighVolMusic‘s website.