Tuff singer Stevie Rachelle recently mentioned the second last gig ever performed by Vinnie Vincent Invasion in his sixth instalment of the Tuff Diaries and now former Vinnie Vincent Invasion drummer Bobby Rock posted on Facebook earlier today reflecting on the 30th year anniversary of the band’s last ever gig, which took place at the Celebrity Theatre in Anaheim, California, USA on August 26, 1988. 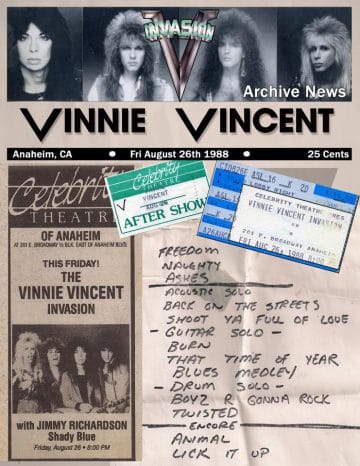 “On this day, 30 years ago, VVI took the stage for the final time. Very strange to contemplate exactly how long ago that was! Special thanks to Pat Lucero for putting together this cool composite image, comprised of a few super rare pieces from his private collection. Pat has a ton of this kind of shit, which is why I pestered him so much for various photos when putting together my latest book! You the man, Holmes!”

If you want to help the channel or just thank 🙂 – https://www.donationalerts.com/r/waldmannTracklist:01. Shoot U Full Of Love02. Vinnie Vincent Guitar Solo0…