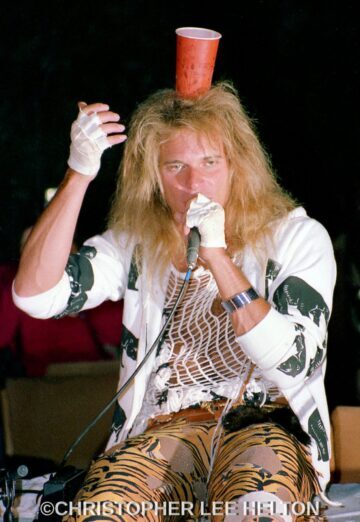 “I was living in Buena Park. I had a gig in Huntington Beach, it was Saturday night, my ’74 Dodge Dart was in the shop, and I was gonna have my roommate drive me to the gig. Suddenly, I get a call and it said, “Hey, get down to Hollywood now.” … “I don’t have a car. For what?” … “We can’t tell you.” … “What do you mean, you can’t tell me?” It was a friend of mine. His name was Mike Sprague, he’s got a company called Sound Image, and he was the sound man for Van Halen in the early and mid-80s. So, he goes, “I’ll come and get you.” … “Alright, but I have a gig at 8:30.” He goes, “I’ll drive you to the gig.” … “Oh, so you’re gonna come from Hollywood, and pick me up in Buena Park?” So, he comes down and he picks me up and I’m just going, “Who is it? Who am I auditioning for?” And then, at the same time, I don’t have any drumsticks. [Laughs]. I don’t have any because all my stuff is at the club. It was kind of funny…I went to a NAMM show like a year earlier, and somebody gave me these drum sticks where they have a little switch at the bottom of the stick, where you flick a switch in the tips light up. So, that’s what I went into the audition with. [Laughs].

So, I have no idea what I’m in for, and Mike goes, “Don’t worry, they just want to hear your style.” He tells me, “It’s a band with Steve Vai and Billy Sheehan,” and to be completely honest, I didn’t know who they were at the time, they’re world-famous now, but at that time, I didn’t know them. We’re driving, Mike goes, “Well, they’re gonna tell you to play a shuffle beat, they’re gonna ask you to play your favorite beats,” and blah blah blah, whatever, and I was like the last one of they were auditioning for the day. So, I was like, “Great…the last guy….everybody’s gonna be sick and tired.” And so, I come in, and they say, “Hello. Alright, give us your favorite beat,” and not to brag or anything, but I just went into one of my coolest beats, and really slammed something heavy. Everybody goes nuts, and says, “Well, it’s about time!” Then they said, “Okay, play us a shuffle beat,” and I’m in my head going, “I really can’t think of a shuffle beat,” I was just kind of staggered going, “I don’t know what I’m doing,” and I kind of stopped and started again. And then he tells me that, “This was an audition for David Lee Roth, but Dave can’t be there, and it can’t be known because it’s top-secret, because he’s still in Van Halen. He’s trying out band members in secret, so that’s why I couldn’t tell you.” … “I just auditioned for David Lee Roth?” … “Yeah, you did.” … “Well, I wish I was more prepared.”

Obviously, I didn’t get the gig, and they got Gregg Bissonette, who is a spectacular drummer. Greg is a far better drummer than I am. I would have been a good choice, but Gregg Bissonette was just a top-notch choice. And at the same time, there were Hollywood people…it was theater seating, and in the back is where everybody was sitting with their had clipboards, but they were in the dark. And there was a whole bunch of Hollywood bands that were like, “Well, while we’re here, we’re looking for a drummer too, so we’ll just get the remnants.” [Laughs].”

You can read the rest of the interview with Brian James Fox on Vinyl Writer Music‘s website.