KISS drummer Eric Singer was recently interviewed by John Jeffrey for Rock Music Star and spoke about taking up the drums as a child and his father’s role in that regard along with whether Gene Simmons or Paul Stanley has the final say in KISS. 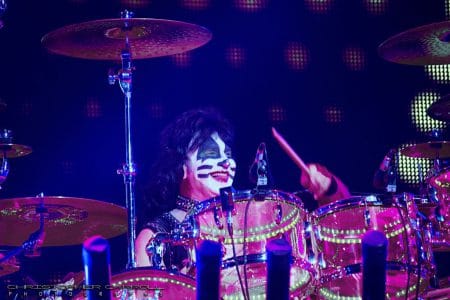 With respect to the latter point, Singer stated: “People always think it’s Gene. Respectfully, Gene and Paul do the thing together, but I always tell people, it’s not what you think. Nothing happens in KISS without Paul Stanley saying, “Yay.” There’s some times when Paul doesn’t care about something, and says, “Yeah, I don’t care. Whatever.” Put it this way, if Gene wants to do it, and Eric and Tommy want to do it, and everybody else…if Paul doesn’t want to do something, we’re not doing it. If Paul wants to do it and Gene doesn’t, Gene usually says, “Okay, whatever.” Gene usually just wants to play. He just wants to keep doing whatever we do. So, there is that….”

Singer also raved about what great shape that Stanley keeps himself in as he stated: “Look at the shape Paul Stanley’s in. How many guys do you know, who are 65 and in that shape? I don’t. Paul’s in phenomenal shape. You know why? He puts in the time. He’s done that most of his life. He’s been one of those guys who watches what he eats, takes care of himself and works out. He trains…he does it. It’s not easy to do that. I gotta give the guy credit because it takes a lot of hard work, and a lot of discipline in being able to do that. People might think that’s not a big deal. You trying doing that, year in and year out. I admire him. It’s funny how you can kind of inspire and influence each other. And Paul, to me, in that regard, is very inspirational.”

You can read the rest of the interview with Eric Singer at Rock Music Star.