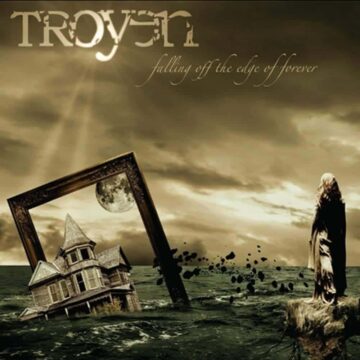 Vieira noted that Troyen first formed back in early 1981 during the UK’s New Wave of British Heavy Metal but by 1982, the group had disbanded prior to the completion of a three-track single and a LP for Neat Records. Baddley was asked whether looking back, the prospect of putting out an album should have been enough to keep the band together to which he indicated (as translated from Portuguese to English by Marcelo Vieira): “Yeah, ideally, yeah. We all got to a point where we were frustrated about where the band was going and, after we came back off an European tour, we just had a conflict of interest. It was disappointing, unfortunately.”

Baddley was asked what he was up to in the 30 plus years after Troyen first disbanded to which he replied: “I started to work in the financial industry. I worked for the same company for 35 years and I left them to take an early retirement about two and a half years ago. I got married, I got three wonderful children, five grandchildren, and I was living my life, and then, about 10, 12 years ago, at a bar, I bumped into an old friend who asked me if I was playing drums and I said “No, I haven’t got anything, I’ve walked away from that”, and he said “Well, that’s a shame, because a mate of mine is looking to put a band together”. That was on a Thursday, and by the Sunday I bought a drum kit because I was just a spud, I needed to get back into it. I formed a covers band, and in this covers band I got with Steve McGuire, who was the guitarist out of Troyen, so we started playing together again about 13 years ago.”

In terms of what led Troyen to officially reform in 2014 and whether playing in a covers band sparked him to do it, Baddley explained: “No, it was the organization of the UK Brofest, they put festivals in the city of Newcastle. Basically, they wanted to get old bands from the 80s and 90s back together. I got a Facebook message in about May 2014 asking me if I was Jeff Baddley from Troyen and if I would be interested in getting the band back together for what was initially just one gig. Obviously, I knew Steve [McGuire] because he was playing with me in the covers band, and I knew where the old bass player, Dave [Strathearn], lived, so I got in touch with him. Nick [Cookson], the guitarist, was a little harder to find because he’d gone off the radar, but we finally tracked him down. We met in a bar, had a couple of beers and decided that “why not? we’ve got nothing to lose, let’s do it”. We got back into the swing just for one gig, initially.”

You can read the entire interview with Jeff Baddley in Portuguese at Marcelo Vieira Music‘s website.

Troyen‘s “No Going Back” single: