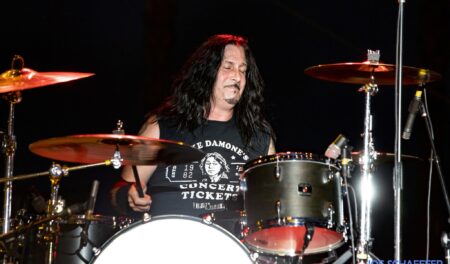 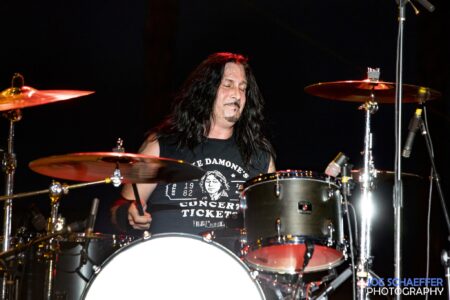 Kelly‘s first gig with Quiet Riot was back on May 17, 2019 at the Wildflower Arts & Music Festival in Richardson, Texas, USA when he ended up replacing drummer Frankie Banali who we now know had already been diagnosed with stage four pancreatic cancer by that time. Banali ended up passing away on August 20, 2020.

In terms of how he ended up becoming a member of Quiet Riot, Kelly indicated: “I’ll try to make this short. [Laughs]. I’ve been playing in Hookers & Blow with Quiet Riot guitarist Alex Grossi for a few years. I knew Frankie [Banali] was sick. Quiet Riot was going to be playing in Dallas where I live, so since I was going to be there anyway, I offered to help Frankie with things knowing he wasn’t 100% healthwise. Not expecting anything to come of it, I had mentioned to Alex if they ever needed help, I would cover for Frankie. Alex called me two days before that Dallas show, and asked, “Could you cover for Frankie?” After that, when Frankie couldn’t make a show, I would do it for him. Before Frankie had passed away, he said, “I want Quiet Riot to continue on, and I want you to be the drummer to replace me.””

With respect to replacing Banali while preserving his legacy, Kelly stated: “You don’t replace a player like Frankie. His playing really does stand out on every song the band recorded. He pushed it to another level in his live performances too! Frankie was a big influence of mine growing up, and I like to think that I’m doing an OK job of carrying on the Quiet Riot legacy. I think having respect for what he’s done is most important. From there, I try my best to bring that forward while still being myself.”

You can read the rest of the interview with Johnny Kelly at Vinyl Writer Music‘s website.