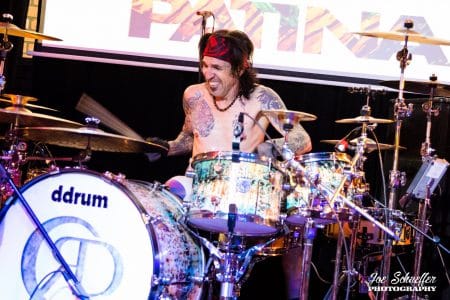 The following message was posted on Varone‘s Facebook page yesterday:

“Dearest Fans… I’ve received many emails regarding the upcoming RDC tour, and sadly I will not be playing drums. As you know, I made a very dramatic, ridiculous, embarrassing retirement announcement last year due to stupidity, emotions and pain. With that comes consequences, and a lesson learned. I have since apologized to Jake, Ant and Darren for any drama, and I wish them nothing but the best. I’m very grateful to have been a part of one of the greatest records of my career. I put together this video called MY TIME ON THE THRONE, IN 8 MINUTES… I hope you enjoy… and thank you always for the love and support… I’ll see you soon in 30yrs a drummer and you’ll hear me playing on the documentary soundtrack…

Back in February 2017, Red Dragon Cartel announced that Varone was going to be their new drummer. Varone ended up playing on Red Dragon Cartel‘s sophomore album Patina, which was released in November 2018. In March 2019, Varone confirmed that he was not kidding and that he indeed was retiring from drumming after finishing Red Dragon Cartel‘s remaining 2019 tour dates. Red Dragon Cartel have already announced a couple of dates for April 29, 2020 and May 1, 2020, and will apparently be touring this spring but without Varone in the line-up.

Phil Varone‘s My Time On The Throne video: