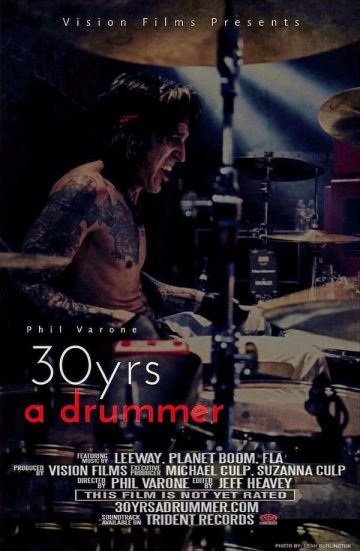 Former Skid Row, Saigon Kick and Red Dragon Cartel drummer Phil Varone will be releasing his documentary 30 Yrs A Drummer and the accompanying soundtrack on October 15, 2020.

The following message was posted on Varone‘s Facebook page on June 1, 2020: “30yrs a drummer NEW release date…I’m excited to announce the new release date for 30yrs a drummer documentary and Trident Records soundtrack is October 15th. Along with being the release date, October 15th is my birthday as well, so it will truly be a great day to celebrate. A special thanks to all that have supported the documentary, for your patience and continued support.

Check out the brand new trailer!!!

“30yrs a drummer soundtrack will be available through Trident Records, October 15th, 2020. It will feature music from the documentary, as well as never before heard songs and bands that Phil played with throughout his music career.

​The soundtrack will also feature original songs and demos that never made the records, as well as brand new recordings.

​Trident will be releasing the soundtrack as a digital download and on limited addition vinyl.”