Roxy Petrucci, who also handles the drums in Vixen and VIP Aftershow, was asked what she has been up to these days to which she replied: 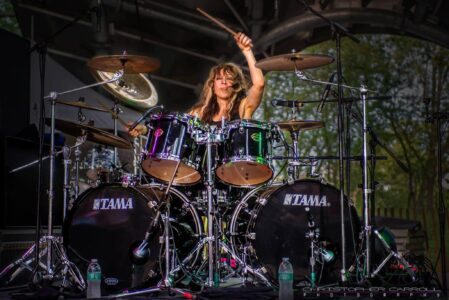 “I’m doing great but really miss pounding the skins live on stage! During the summer lockdown I picked up Power Tools and helped renovate houses with my husband while also making time to write and record new songs. 2021 should be an exciting year with new music releases by Vixen, Madam X and VIP Aftershow!”

Vixen‘s new album will be the first with new members Lorraine Lewis (lead vocals) and Britt Lightning (guitars) to which Roxy Petrucci noted: “Yes! We’re sending song ideas back and forth and before the lockdown we were in rehearsal hammering out tunes and recording demos. This is a new lineup so we’re still getting to know each other’s writing styles. Van Halen didn’t miss a beat with Sammy Hagar so there’s no reason why we can’t do the same. The talent, excitement and determination is there, even more so now.”

In terms of how Lewis and Lightning ended up joining Vixen, Roxy Petrucci indicated (with slight edits): “Share [Ross] and I have worked with Lorraine in the past and of course we have history, we’re ’80s rocker chicks! So, when Janet had her medical emergency we asked Lorraine if she could step in for the one show. She learned the set in a short period of time and man did she nail it! Her stage presence was phenomenal and vocals were spot on, she was on fire! We definitely felt chemistry with her on and off stage. Also very important to us was the fan’s reactions, and they loved her!! When Janet [Gardner] made the decision to leave Vixen there was no question who we were going to call. In regards to Britt, well she’s just fantastic and came highly recommended. Share and I watched videos of her performing with Latin star Alejandro Sanz and Rachel Platten… we were blown away! So, next step was to get in the same room and jam with her. Britt‘s guitaring playing is very versatile, she does a fantastic job with the Vixen classics while adding her own flair to each song. She has it all; talent, beauty and brains!”

You can read the rest of the interviews with Roxy and Maxine Petrucci at All Music / All Bands‘ Facebook page.