Vixen drummer Roxy Petrucci was recently interviewed by I’m Music Magazine and spoke about the unreleased tracks on the female rockers’ upcoming new live album Live Fire, which will be released via Rat Pack Records on July 6, 2018. 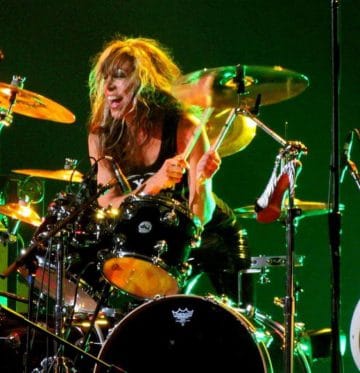 In terms of Rat Pat Records, Petrucci stated: “It’s really cool and we really enjoy working with them. They’re really supportive and I think we’re on a really good label. What happened was the fans have been asking for a new record for a long time now. We had just gotten a new guitarist, Britt Lightning, and she’s been playing with us for about a year now. It’s all about timing and she fits in perfect now. She gels with the band we thought since the fans wanted a record, let’s go ahead and give them something live which we feel comfortable doing. When you go into the studio, you have to be really comfortable with each other and really gel. We feel like she’s ready now and we’re ready to do a studio record. That will come next, but for now I think the live record is a great way to say that Vixen is back. We’re playing the classic Vixen tunes and we recorded it at the Arcada Theater in Chicago which was a perfect venue. We’re throwing in a couple of studio songs and one of them is “You Ought to Know by Now.” It’s a tune that we played back in the day when Jan was in the band. I don’t know why we never recorded it, but we did it live and it’s actually on YouTube and Jan is in it. It’s such a great tune and I thought that we should record it. We did and I think that’s how we attracted Rat Pak Records. They’re Vixen fans too and they wanted to get behind us. So, we’re releasing the live record and in 2019 we’ll be releasing a studio record.”

Vixen‘s “You Ought To Know By Now” song:

With respect to the song “Big Brother” for which a live version appears on the new album Live Fire, Petrucci advised: “Yes and I don’t know why. We actually did do a demo of it and it doesn’t have the signature, huge Vixen chorus. Back then, it was the first Vixen record and we kind of did what we were told. The record company and our management picked the songs that would go on the record. Well, the first record at least; on the second one, it was a little different ballgame. It’s a really good song and it doesn’t matter that it didn’t make the record because it made this one.”

You can read the rest of the interview with Roxy Petrucci at I’m Music Magazine.